Masking in the Performances of Yassine Balbzioui

Playing with conventions and shifting between media is the motor driving Yassine Balbzioui’s creative output. In a Brechtian recourse to distancing, paradox, and the comedic, the artist crisscrosses several layers of meaning, causing viewers to lose their bearings in a labyrinth of uncertainty and apprehension. His installations as well as his performances and oil paintings are variations on his passion for transforming materials and images, and return again and again to the metaphor of the mask, particularly animal head masks. True to his understanding of art as “taking place in the kitchen, not in intension” (1), Balbzioui refines his ideas and recipes in his performances, in which the time and space of creation give rhythm to the life of his creatures, some of which he then in turn makes available to viewers in an installation. By experimenting with objects—which thereby become the materials of his art—rather than with concepts, he thus allows for his creations to be recontextualized and reworked.

In his installation-performance Lazy Birds (2) (2012), Balbzioui, dressed in white coveralls and wearing a mask of a bird with a black beak, finishes constructing one of his puppets by stuffing it with newspaper. Seated next to him on chairs, the three other extras seem to be waiting for their maker’s next idea. Their pectorals, their heads, their entire bodies are shaped out of adhesive tape and burnt plastic bags. Lazy birds, oiled birds, or perhaps fallen angels, they have been deprived of their capacity for taking flight. Their limbs are suspended from the walls and the ceiling by black nylon pantyhose, as if they were pinned down to a hospital bed, subject to the forces of gravity. Then, each of them tries to free itself from its trouble by transforming into a bird bath in a too-narrow tub, the bodies pierced by a jet of water in an evocation of a sun made out of fairy lights. Another attempts an escape by attaching inflated plastic bags to its arms. 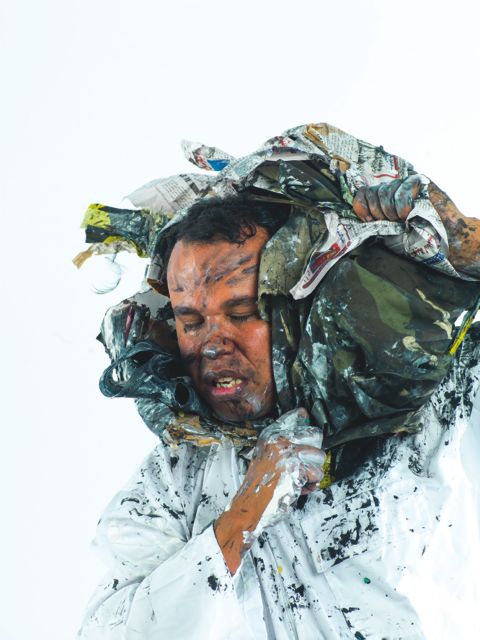 Balbzioui goes even further with this shackling of freedom, this effort, this transformation of the body in his work Grosse tête (big head), which he began in 2010 as a collection of photographs and videos and then presented as a performance in Dakar in 2012. The artist literally created a “big head” out of layers of different materials held in place by a huge amount of tape wrapped around his head. Grosse tête also features the white coveralls, the plastic bags, and the paint from other works (3). For the Marrakech Biennale, he decided to explore working with liquids, so he made tar out of honey and black paint, adding feathers in reference to the famous Wild West punishment. The viewer’s gaze is drawn to the artist’s movements, which are reminiscent of those of a boxer. Balbzioui struggles to attach the different layers to his head, occasionally punching the material he molds with his hands and covers with black and white paint. He piles on more and more stuff, from plastic bags to a camouflage jacket to moving boxes, and the bigger the construction gets, the more he is hampered by it. Constrained in his movements, his field of vision reduced—one wonders how he manages to breathe underneath all the weight he saddles himself with. The performance ends with the figure’s exhaustion, and the artist tears off his big head.

Balbzioui’s performances interrogate the relationship between the artist’s body, as medium and surface of his work, and the mask. Particularly Grosse tête visualizes certain psychological mechanisms, such as how we hide ourselves, how we cobble together layers of protection and camouflage according to what each of us wants to conceal from or show to others. The power of unconscious and conscious phenomena is translated by the physical effort and the action directed at the body in an accumulation of more and more layers of masks, to the point of impinging upon one’s own freedom. As always, “the visual takes over”—or at least appearances  (4).
Yassine Balbzioui (*1972, Kelâat Es-Sraghna, Morocco) was trained at the Casablanca School of Fine Arts and the Bordeaux School of Fine Arts. He lives and works in Paris, Berlin, and Morocco.

Sophie Eliot is a Ph.D. student and art critic based in Berlin. She is currently writing a dissertation on curatorial practices in contemporary African art at the University of Oldenburg, Germany.

(1)+(4) Skype interview with the artist, 2013-2014.
(2) Residency as part of CBK Zuidoost, Stichting FLAT, and Stedelijk Museum’s “BijlmAIR” program, Amsterdam 2012.
(3) E.g., his performance Ceinture noire (black belt) (2010) presented at the 8th “Danse l’Afrique danse!” Festival (Bamako 2010), in which Balbzioui, wearing a plastic bag on his head, kicked a pile of cinderblocks into oblivion, or his untitled collages (2011, mixed media), in which yellow and blue plastic bags cover the heads of antique sculptures reproduced in black and white.

In conversation with Dalila Dalléas Bouzar

“My paintings show that there is no such thing as discontinuity in the history of art.”