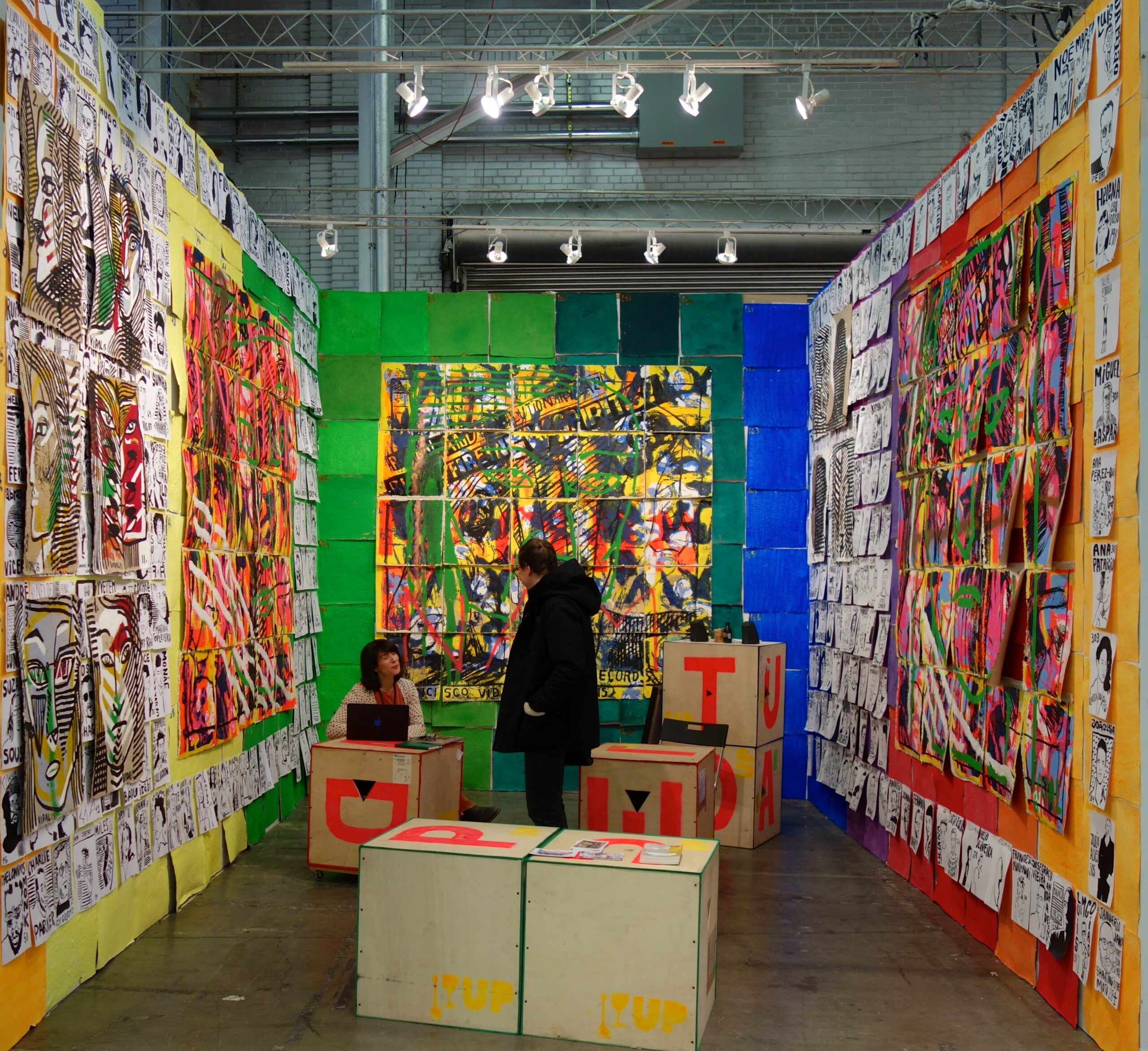 Francisco Vidal’s presentation is part of his ongoing working methodology, derived from imagining the artist as a machine and the studio as a workshop. The works showcased at Armory Focus 2016 were produced by using the U.topia Machine, a 60 x 60 cm plywood box containing an all-in-one toolkit for the mass production of screen prints and handmade recycled paper. Effectively functioning as a mobile studio, the U.topia Machine envisions a system of art making and exhibiting that is no longer tied to a sense of place and highlights the status of the artist as an international worker. 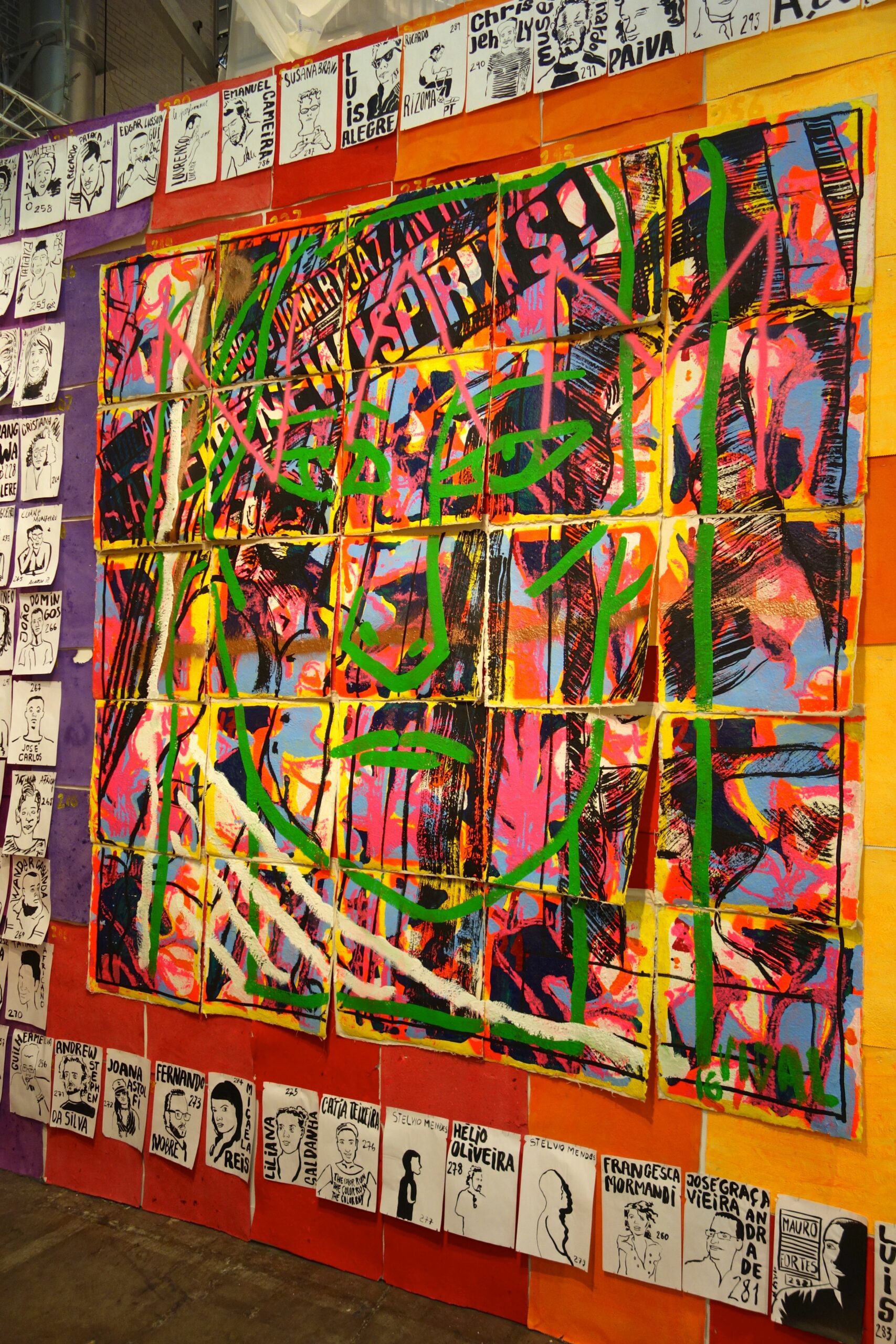 The gallery’s booth is covered by a modular grid made of thickly textured, handmade, recycled cardboard which forms the backdrop of much of Vidal’s artistic output. Hung atop the paper, the installation includes a selection of the artist’s new, previously unseen paintings. Emphasizing influences such as graffiti and graphic novels, Vidal’s exuberantly colorful, gestural and neo-expressionist paintings depict cotton flower motifs. 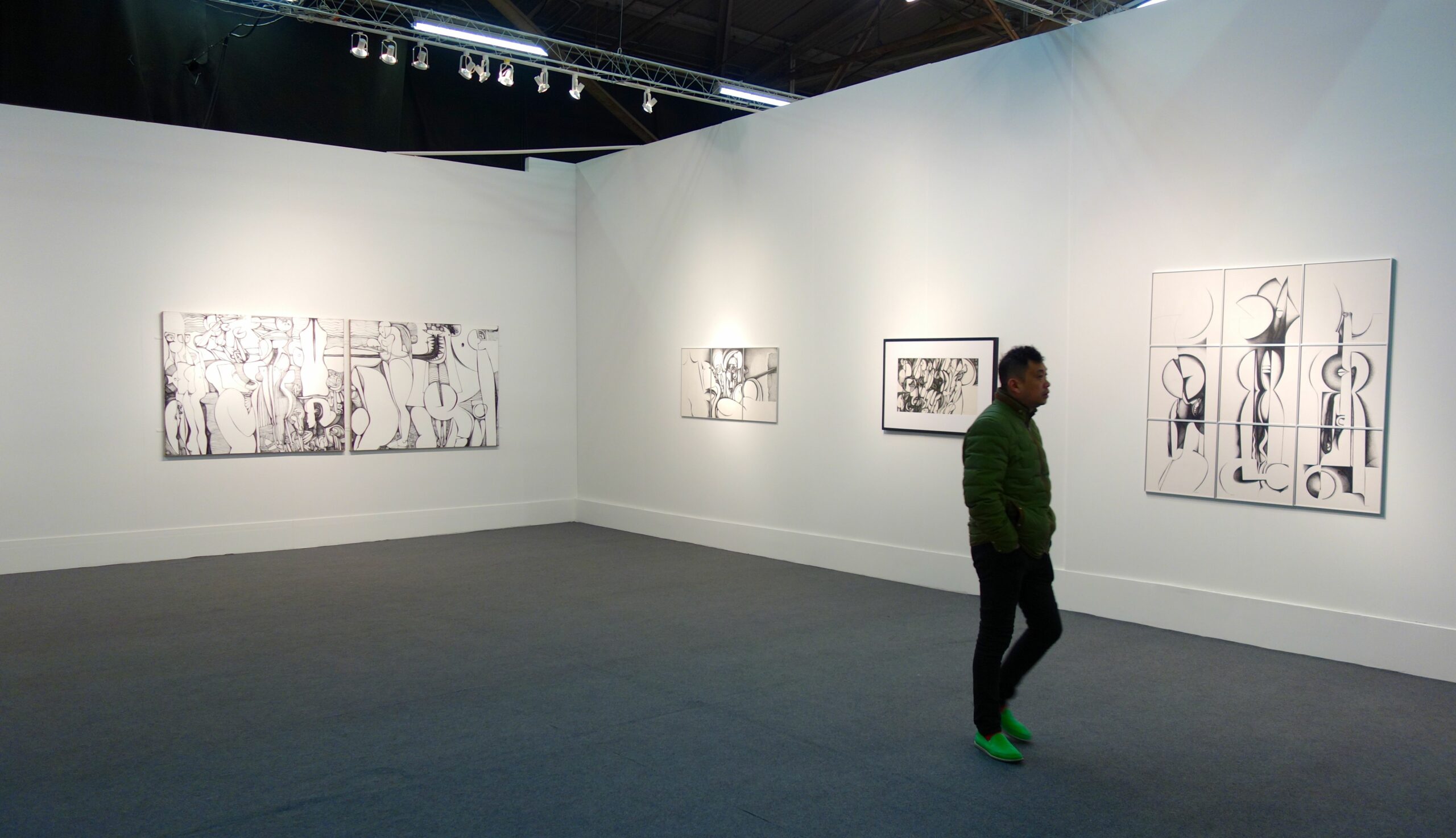 Sudanese artist Ibrahim El-Salahi is considered the godfather of African and Arabic Modernism and was the first artist born in Africa to have a solo retrospective at the Tate Modern in 2013.

El-Salahi studied Fine Arts at the School of Design, Gordon Memorial College, which is known today as the University of Khartoum. He subsequently attended the Slade School of Fine Art in London from 1954 to 1957 and then returned to Sudan where he developed a visual vocabulary with his drawings—a pioneering fusion of Islamic, Sudanese, Arab, and Western artistic traditions. El-Salahi’s work has evolved through several phases. From the 1950s to 1970s he mainly worked with elementary forms and lines; then his paintings became more abstract and organic in later years. Today, however, lines continue to play a significant role in his works, as well as the use of white and black paint. 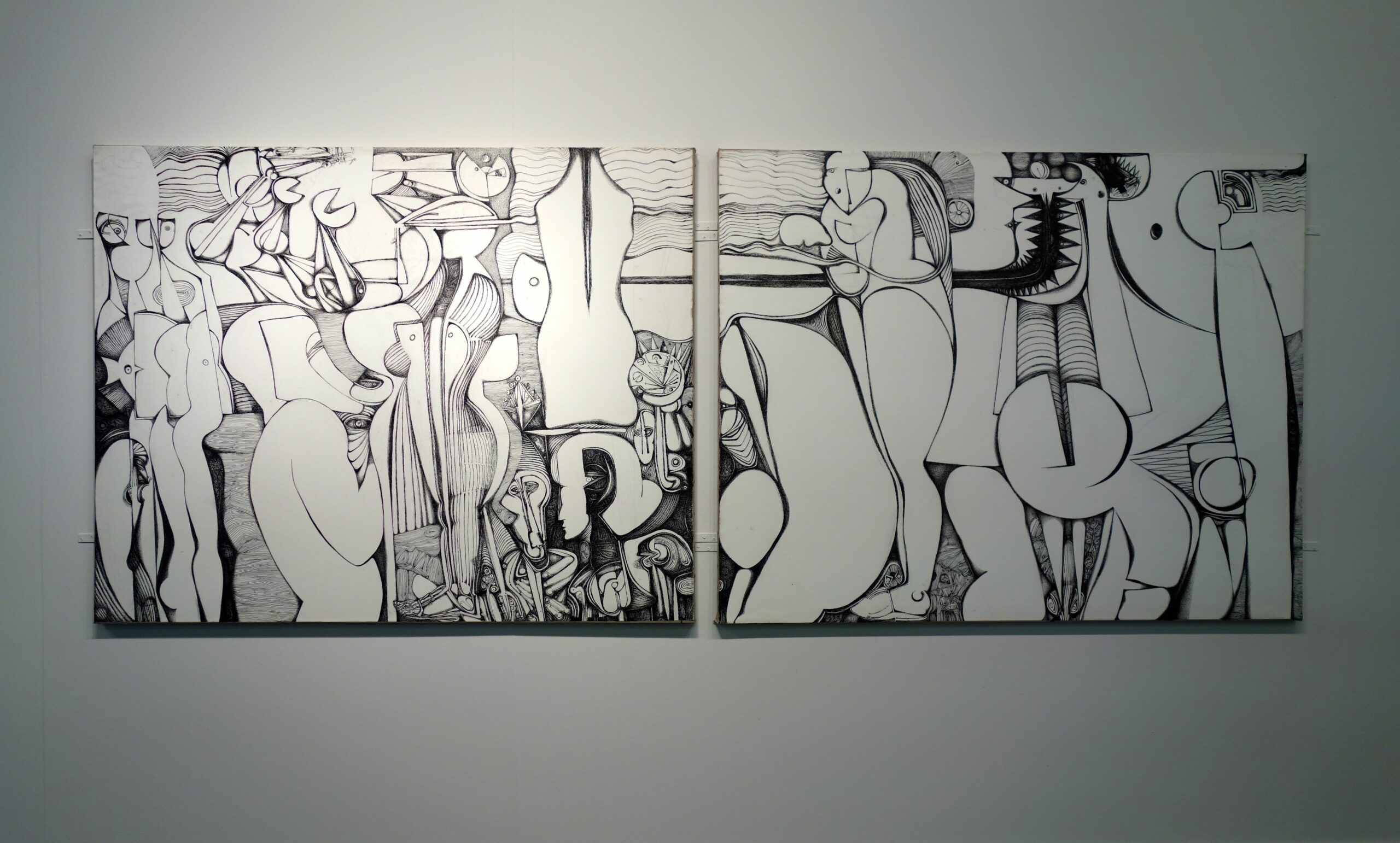 In the 1960s, El-Salahi was associated with the seminal Mbari Mbayo Club, a hub of writers, dramatists and intellectuals in Ibadan, Nigeria. From 1969 to 1972, he served as Assistant Cultural Attaché at the Sudanese Embassy in London and later returned to Sudan as Director of Culture and Undersecretary in the Ministry of Culture and Information until September 1975 when he was imprisoned without charge for six months. Afterward, he left the country, working for some years in Doha, Qatar, before settling in Oxford, England in 1990. 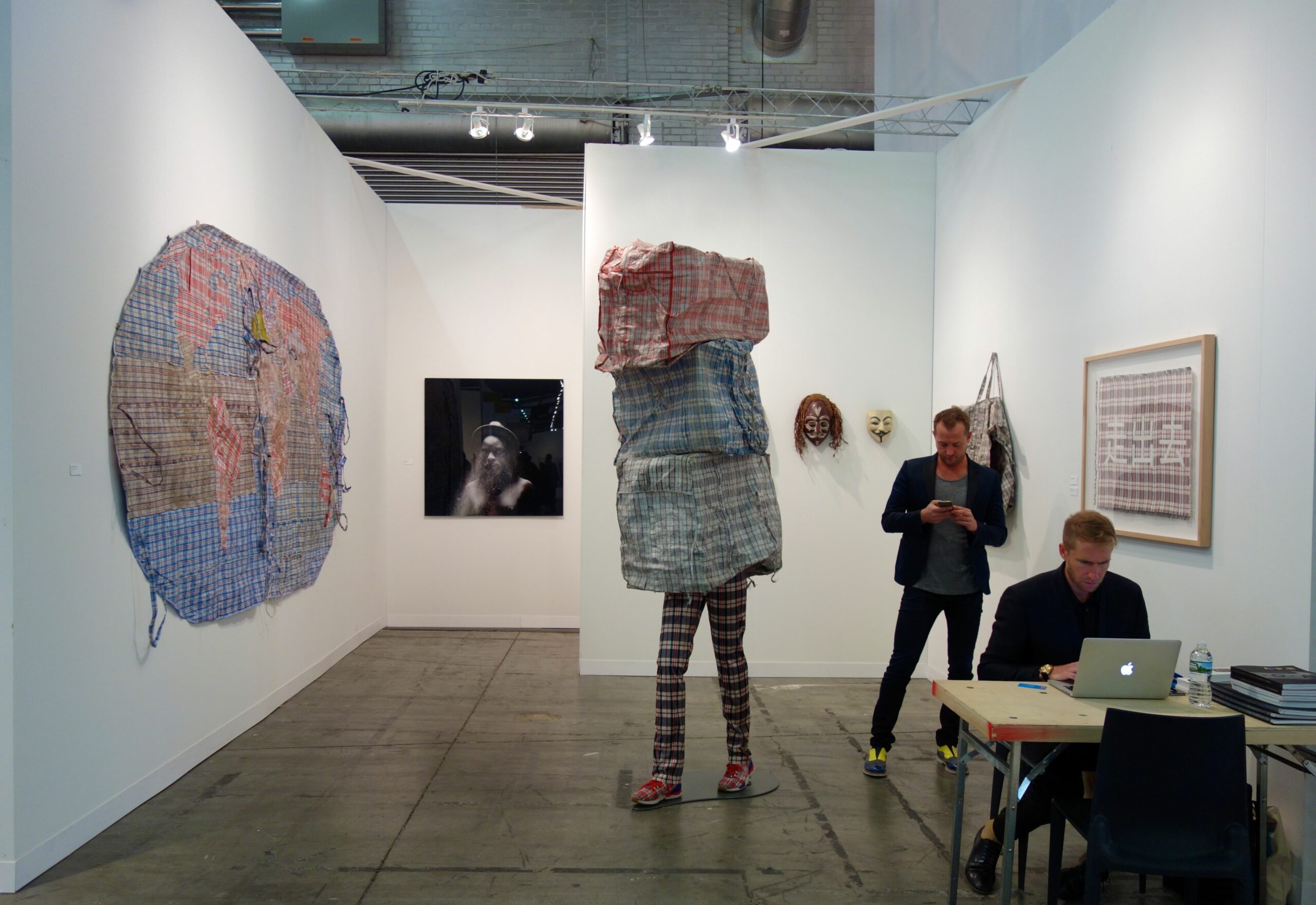 Dan Halter’s artistic practice is informed by his position as a Zimbabwean currently living in South Africa. His work deals with a sense of dislocated national identity, human migration and the dark humor of present realities in Southern Africa—largely backlash to a history of oppression that continues to this day. He uses ubiquitous materials and employs local popular visual strategies as a form of expression. This often exploits the language of craft and curio in a conceptual art context. Two words that are useful in describing his art are fabric and fabrication. At Armory Focus 2016, Halter presents his most recent works—a combination of bag works, sculpture and woven works. 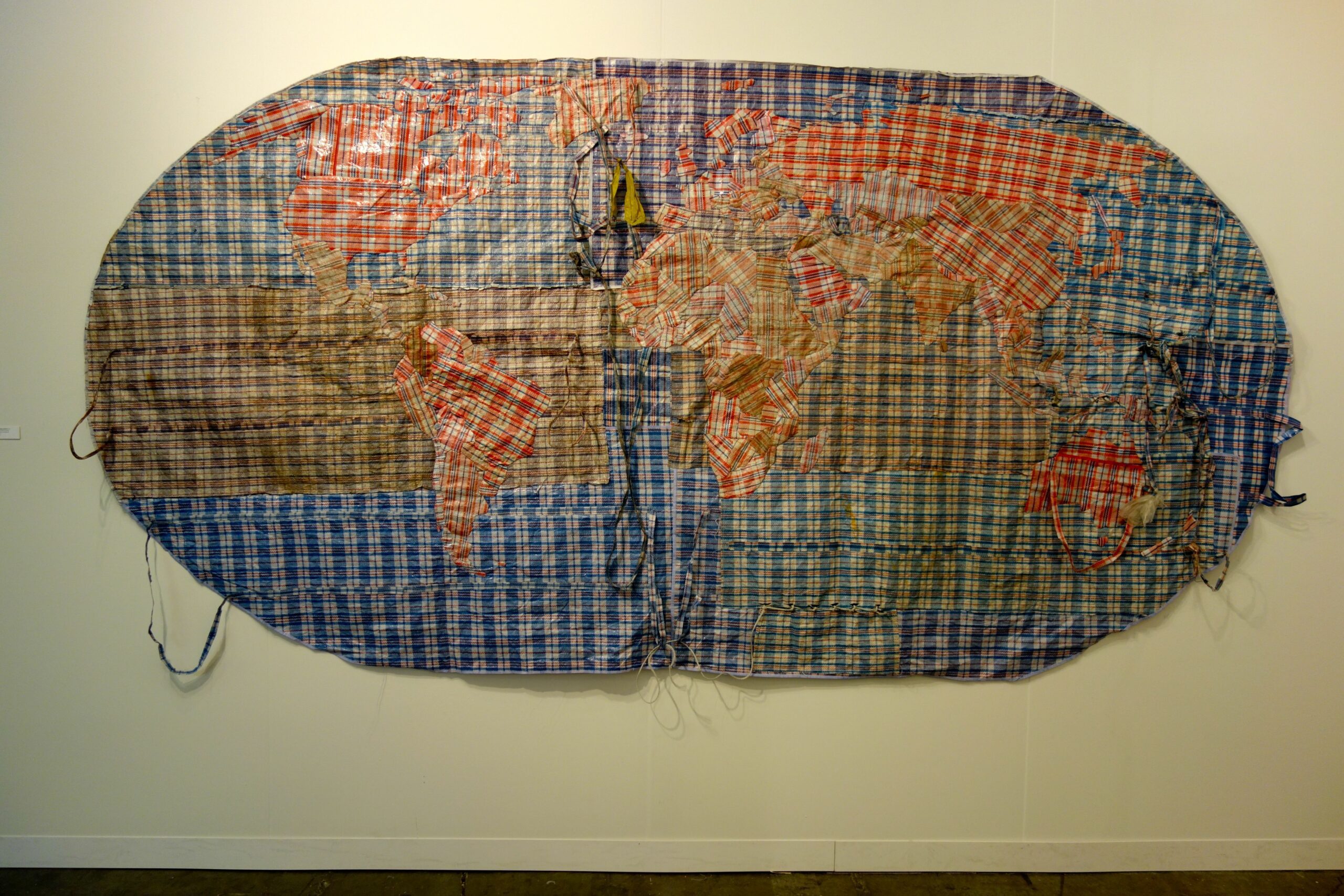 Halter graduated from the University of Cape Town with a B.F.A. in 2001. His solo exhibitions The Truth Lies Here (2012) and The Original is Unfaithful to The Translation (2015), WHATIFTHEWORLD Gallery, Cape Town. Group shows include the 16th and 17th VideoBrasil (São Paulo) in 2007 and 2011; the 10th Havana Biennale in 2009; the Dakar Biennale in 2010; and Earth Matters: Land as Material and Metaphor in