Artist Mark Bradford engages in his old neighbourhood in South LA, where he recently opened an art space that encourages community action.

Artist Mark Bradford engages in his old neighbourhood in South LA, where he recently opened an art space that encourages community action.

Mark Bradford maps the city of Los Angeles and personal geographies in his show ‘Scorched Earth’. The paintings are a response to the 1992 LA riots and they transpose that feeling of claustrophobia, as though the embers were still ablaze. Mapping and connectivity are repeated tropes in his work, from the tunneling in ‘Finding Barry’ to the depth excavations of ‘Dead Hummingbird.’ He plays with the way the black body is manipulated and coerced. The tunnels are topographical networks, but also depictions of what lies beneath the black body-the weaving and flowing of blood, cells and matter in an arterial landscape. From walking around his studio, it is clear that Bradford is a collector of imagery, narrative and materiality. The paper swathed cord, considered book shelves and palimpsest canvases all point to his artistic range at once large scale industrial to the meticulously intricate. 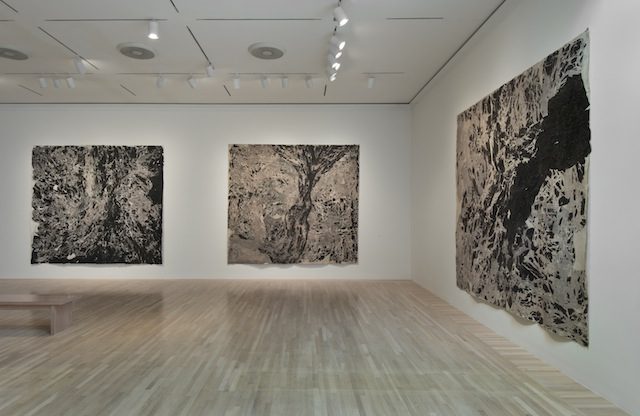 I spoke with Bradford in his studio and we discussed his interpretation of the local, his move from South Central to Santa Monica as a child, the many shifts that he’s witnessed in the neighborhood he returned to in 1997 and how it materializes into his paintings. He agrees that his work is a textual interplay between the observer and the observed and that his love and engagement with language was derived early on from the long stretches he would spend in his mother’s beauty shop.

He cultivates those LA idiosyncrasies and weaves them together in a chaotic mix of oppidan destruction and economic enterprise. His immersion into the lives of people in communities in LA and Chicago eschews the traditional relationship that artists have with their communities. Often they become distant, dissonant actors in the local. This is what is fascinating about Bradford – his deep engagement, this artist/neighborhood convergence that Bradford symbolizes and is physically enacting through the 2011 Mark Bradford Project and more recently through Art + Practice. One wonders what drives that desire to submerge oneself into the unknown, the ‘other’. And how does this engagement with artists in the community, with the streets through his (previous) ‘collecting’ inform his canvas? Bradford is fascinated by the language and text of the local landscape. Remnants of the local in the guise of what he calls ‘merchant posters’ (local ads pinned to fences around the neighborhood) are collected, painted, sanded, until there is little or no trace of them. Rendering South central an invisible, but psychic constant in his paintings.

Bradford has repeatedly worked with the thematic of the local in previous shows – in Chicago, New Orleans and now in his permanent space at Art and Practice. Situated in the heart of Leimert Park, with a strong history of black arts and activism, A+P is at the interface of art and community action. Bradford has built the multi-space organization with his partner, social activist Allan DiCastro, with philanthropist and collector Eileen Harris Norton and the Hammer Museum. Yet the energy from the locals and surrounding businesses is what fills the vibrant centre. The day I visited, artist Dominique Moody sat in her delicately constructed mobile home in the square. There are technology labs, therapy rooms, a gallery, a lecture space and a space for the oldest black-owned bookshop. Co-curator at the Hammer, Jamillah James is programming John Outterbridge and Njideka Akunyili-Crosby this fall. A+P will focus on the local and in particular foster youth in the area. Los Angeles has the highest concentration of foster youth in the US, with approximately 40 percent of the total population attending the local surrounding high schools.

The center is at once a place in flux-construction with workers re-building walls and sanding surfaces and one of serenity, in the gallery where archives from the celebrated Brockman gallery dress the walls. Hanging brightly on two walls in the technology space are beautiful maps of LA. Bradford created them as a way for the foster youth to navigate their way through their own terrain, but also to familiarize themselves with the spaces beyond those boundaries – to feel safe to construct and map their own narratives.

‘I like working with these kids because it encapsulates everything we need to turn our gaze to, with hope, empathy and sweat equity’.