With 22% of all the world's prisoners, the USA is the biggest jailer on the planet. A photography exhibition in Los Angeles looks at dehumanizing effects of prison life in the US and the necessity to re-humanize them.

Photographers have been interested in recording the lives of people imprisoned in penal systems since the 1800s. The development of the mugshot began in the mid-1800s in Belgium and the UK, and Eugène Appert first photographed the convicted in Paris in the late 1800s. In the 1960s Danny Lyon shot intimate portrayals of prison life in Huntsville Texas, as did Garry Winogrand on his tour of America capturing snapshots of everyday life. More recently, Aaron Joel Santos has used color photography to depict the lives of prisoners who engage in Muay Thai boxing in Thailand – rich portraits of powerful male bodies interacting in dancerly fashion with each other and the guards. And Jamal Shabazz, famous for his street photography, shot inmates while he worked as a corrections officer for two decades at Rikers Island, NYC.

With the Frist Museum in Tennessee, Chandra McCormick and Keith Calhoun have created a traveling exhibition whose heavy subject matter insists on a deep and sensitive reading. They have been capturing the lives of prison inmates for over thirty years at one of the largest prisons in the US. On first seeing their black-and-white images, one is likely to be overcome by the ill-treatment of the prisoners at Louisiana State Penitentiary; the echoes of a slave narrative and the degradation of the inhabitants is a painful story to live, witness, and retell. 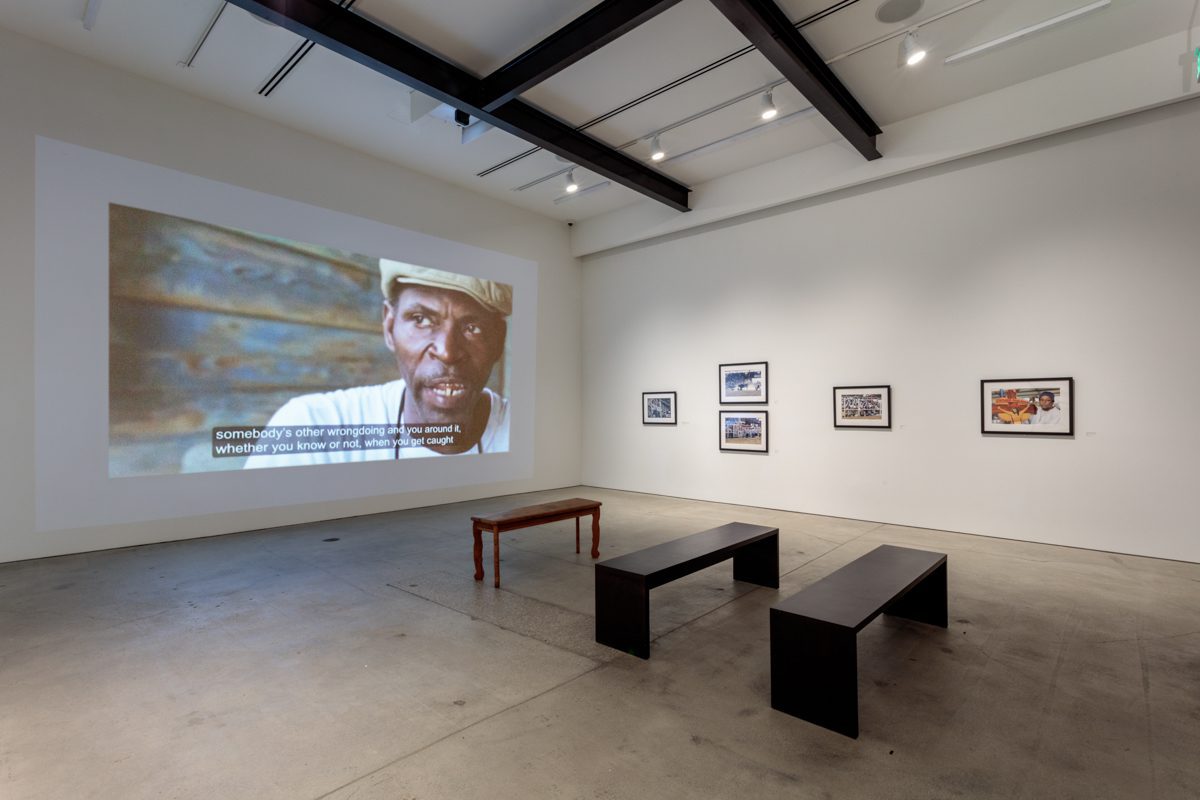 The exhibition features two large-scale video installations in which we see and hear a prisoner named Henry James poetically describe his life in the field and in solitary confinement, known as “the dungeon.” The stark similarities to slavery are not lost in his words, as he describes the positioning of the inmates in relation to the guards – the imbalance of power and the it is wielded. The wage of 42 cents per day can be taken away for minor infractions, like not tilling the field in a way that satisfies the guards. James talks of the savings that some men are accruing for their release, so that they can afford the transportation home, and how these often turn into debt if the work is not satisfactory. He also suggests a pervasive abuse among the prisoners themselves: “I done seen guys basically take advantage of guys in a lot of situations.” Sometimes the video blurs in and out, giving us this opaque glimpse of a disappeared or invisible life. James speaks of having to learn to navigate the negativity in others’ emotions and the cruelty of the guards, yet at the same time he discusses how to have hope in a place of such despair: “So you have to suck all these things up to maintain your achievements.” James was imprisoned in 1982 for a crime that he did not commit. After years of appeals and requests for his DNA to be tested, the US justice system found him innocent and he was finally released in 2011. 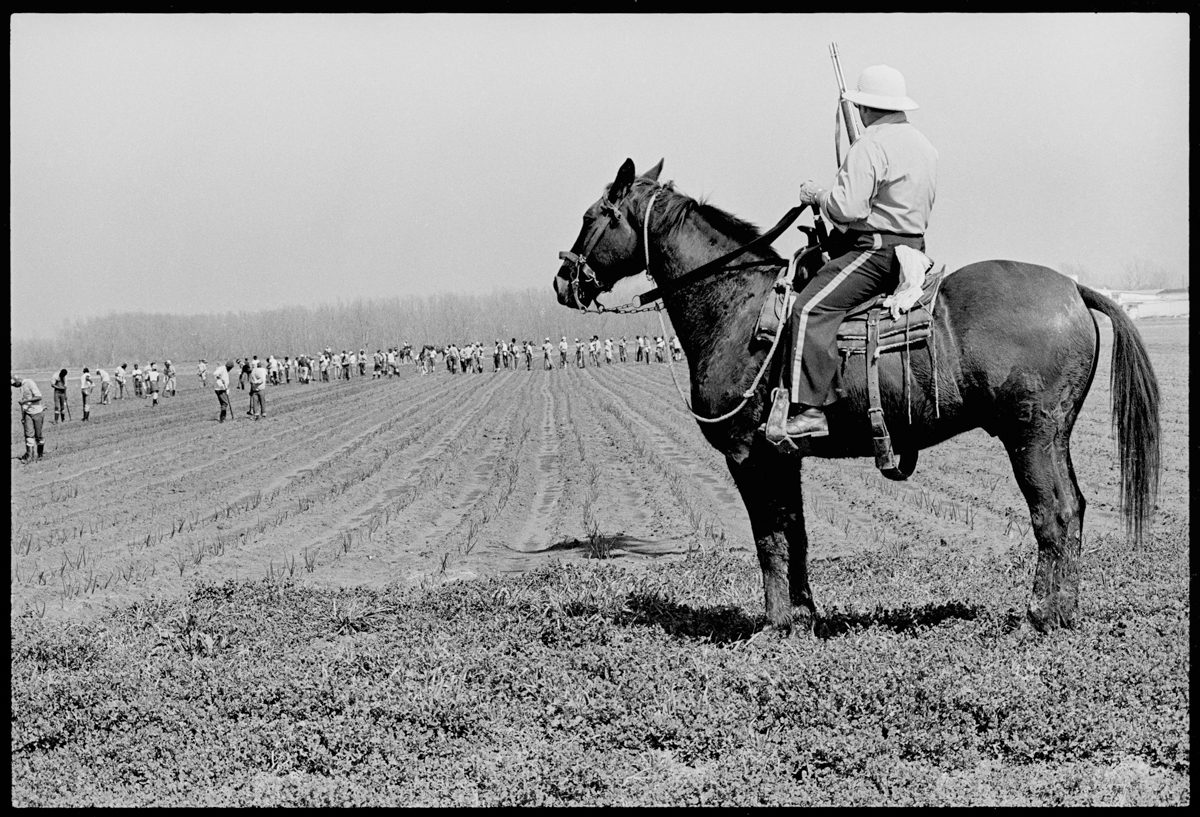 Keith Calhoun. “Who’s that Man on that Horse, I Don’t Know His Name, but They Call Hime Boss”, 1980. Archival pigment print.

Outside of inmates’ usual daily lives, McCormick and Calhoun have been documenting the penitentiary’s rodeo for years, an annual family event that showcases multiple forms of masculine expression enacted with bravado and terror. The shots include imprisoned men performing their imposed lower-class status through acts of barbarism, a further humiliation, but this time in front of their loved ones and the wider community. In Untitled 2013, for example, children are caught in the foreground of the shot. The use of scale in Who’s that man on that horse, I don’t know his name but they call him Boss (1980), shrewdly juxtaposes the imprisoned workers, who appear miniaturized, alongside an oversized horse carrying a guard, another reminder of who holds the power. Horses appear many times in the images, bearing witness to the structural superiority of some humans over others, while literally carrying the burden of that oppression through branding on their own bodies and the carrying of the guards. 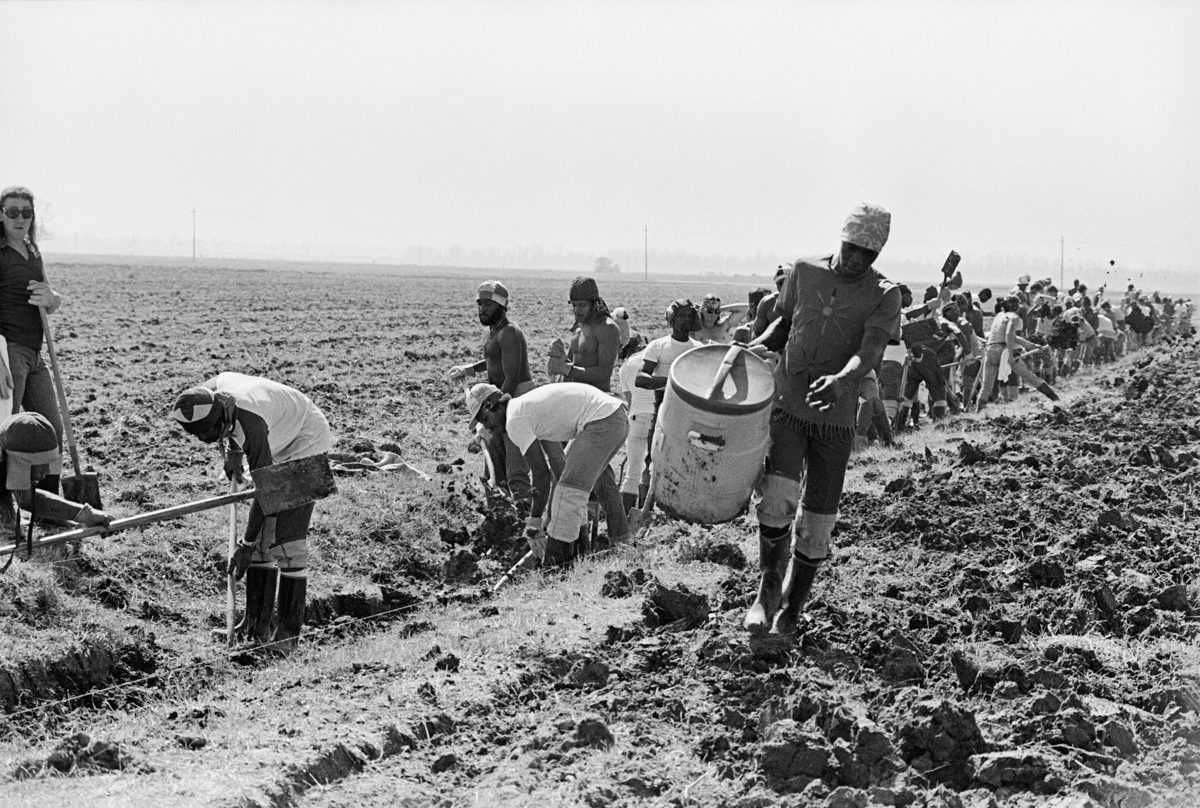 The positioning of the subjects in Men going to work in the fields of Angola (2004) and Ditch Digging (1980) offer rich, lush landscapes as a backdrop. The deliberate use of black-and-white film has us wandering into the trees among the thousands of acres of lost wilderness the prison is built upon, as a way of escape. By including the natural background and foregrounding the men, we are able to see a broader depiction of their lives; that they are imprisoned, but still men, claiming their humanity – a riff on the “I am a man” banners and posters of the Civil Rights Movement. The artists’ empathic approach to their subjects across the exhibition, but especially in With Digging (1980), Fieldwork (1980), Daddy’o (2004), The Water Boy (1980), and Glenn Demourelle served 27 years in Angola State Penitentiary (1980), is a didactic technique that reminds the audience of the dehumanizing effects of prison life in the US and the necessity to re-humanize prisoners. The US contains approximately 4.4 percent of the world’s population and some 22 percent of its prisoners, McCormick and Calhoun’s work is a call for us to reflect on the economic and social exploitation of a large number of the US population for corporate and political gain, and their socially engaged, rich photography is a vital exploration of this violation of human rights.

Slavery. The Prison Industrial Complex: Photographs by Keith Calhoun and Chandra McCormick is at Art + Practice, Los Angeles, in collaboration with the Frist Museum until 5 January 2019