Though cerebral and multilayered, Sanford Biggers work moves easily from medium to medium. Often times he is re-forming the material with bullets or paint—folding and repackaging a familiar material or figure into a different form with subjective gestures. With C& he spoke about his upcoming solo show “Codeswitch” and the many frameworks with which he works within.

Contemporary And: What are you currently working on?

Sanford Biggers: I’m working on my solo exhibition, Codeswitch, opening this April at The Bronx Museum of the Arts. It’s a survey of the last several years, of a series entitled Codex which includes mixed media paintings and sculptures done directly on or made from pre-1900 antique quilts. I’m very excited about it. For me, it’s a way of looking back on all of those different pieces and what the evolution of that project has been. 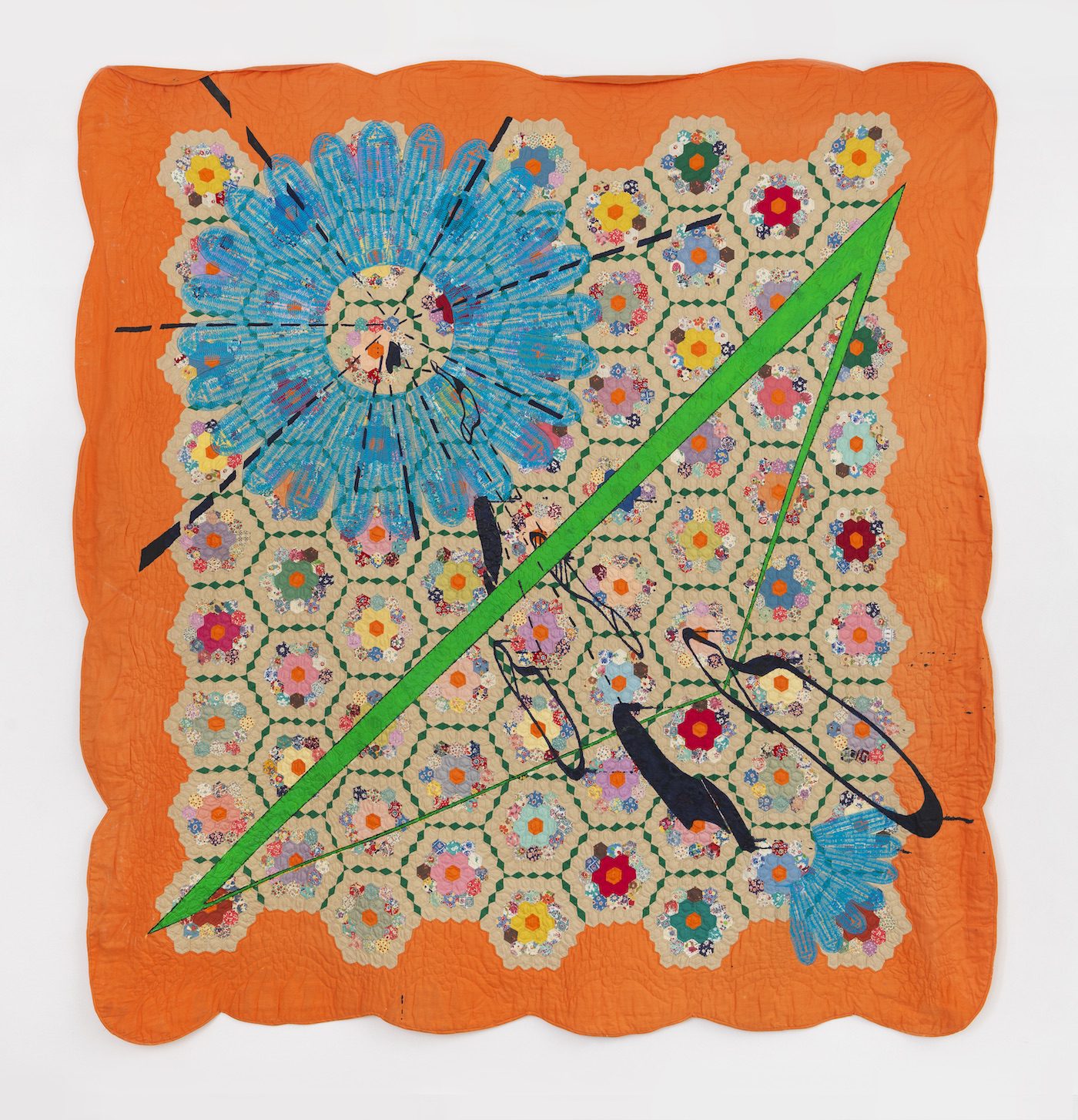 C&: There’s obviously a historical appreciation of the quilt, the ties to the Underground Railroad. What made you approach them with the idea of painting their surface?

SB: The quilts have several different points of interest for me. One of them is the formal aspect of it. I’ve always been into pattern, geometry based images, sacred geometry and textiles. For many years I created dance floors that were made of hand-cut linoleum rubber tiles that were based on mandalas that I fashioned in patterns I designed. I would take the floors to breakdance competitions and videotape the dancers and performers which was the genesis of using sacred geometry in my work. After working on the floors I wanted to move into something that had more of a historical and social dialogue. I was doing a project in Philadelphia where I was looking at stained glass windows and through that research, I ran into a bunch of quilts and learned about the history of quilts considered as signposts along the Underground Railroad. Allegedly, enslaved people escaping the south would come across a certain pattern or quilt folded a certain way and derived certain coded information from that quilt. This has been debated by historians over decades but I think as a piece of vernacular culture and history, it inspired me to think differently about quilts. Quilts already had the pattern content that I was interested in, but now they also had a bit more gravitas because of their supposed historical use. Additionally, there’s a sense of nostalgia: Antique quilts are seen as a piece of Americana and I like that there’s a bit of tension of whether I’m defacing or embellishing these pieces of US-history. 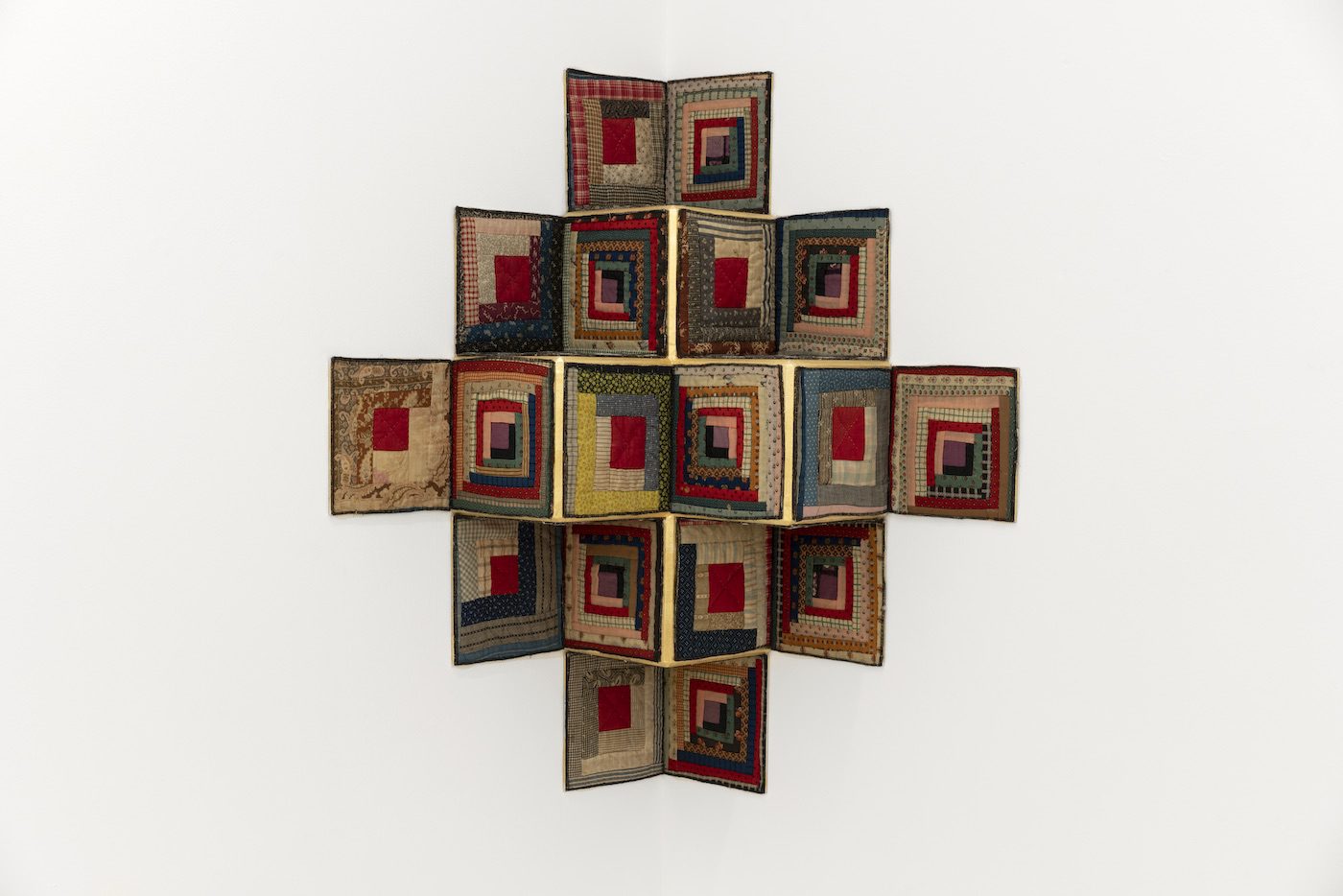 C&: That makes me think about your video work BAM, and how defacing was a repeated marker in African history during colonialism.

SB: In the mid 90’s I lived in Japan, where I got really into Buddhism and Wabi Sabi, an aesthetic inspired by Zen Buddhism, that acknowledges the profundity and beauty within mundane or broken and disfigured objects. The idea is that everything in itself is already perfect, including asymmetry, dirt, rust or ruin. I use that approach in my found objects, quilts and African figures and suggest that their internal power or aura is probably stronger than the actions that I do onto them. So when I take the remnants of those figures and recast them into bronze, it’s a way of taking them from what was a vulnerable state to fortifying them and memorializing – in a material that is largely impregnable. There’s a transformation of these materials which is similar to the way I approach the Antique quilts. By sampling and taking a record that people have long forgotten, finding a breakbeat or something new that re-invigorates them. The quilts are patchworks, which are compromised of pieces of fabric from clothes and textiles that have been used and were going to be thrown away, but have now been re-purposed into artworks and/or utilitarian objects. I too take pieces and impose some type of action to them and then take the remnants to create more work from them. Nothing really gets wasted. It’s a patchwork logic.

C&: That makes me think about the Black Artist’s movement in LA in the 1960’s, artists like Noah Purifoy using assemblage.

SB: I spent a lot of time with Noah. After Japan I spent about three years in LA and I regularly took trips to Twentynine Palms, where he lived. I sat with him many times, interviewed him, and ultimately we became friends. 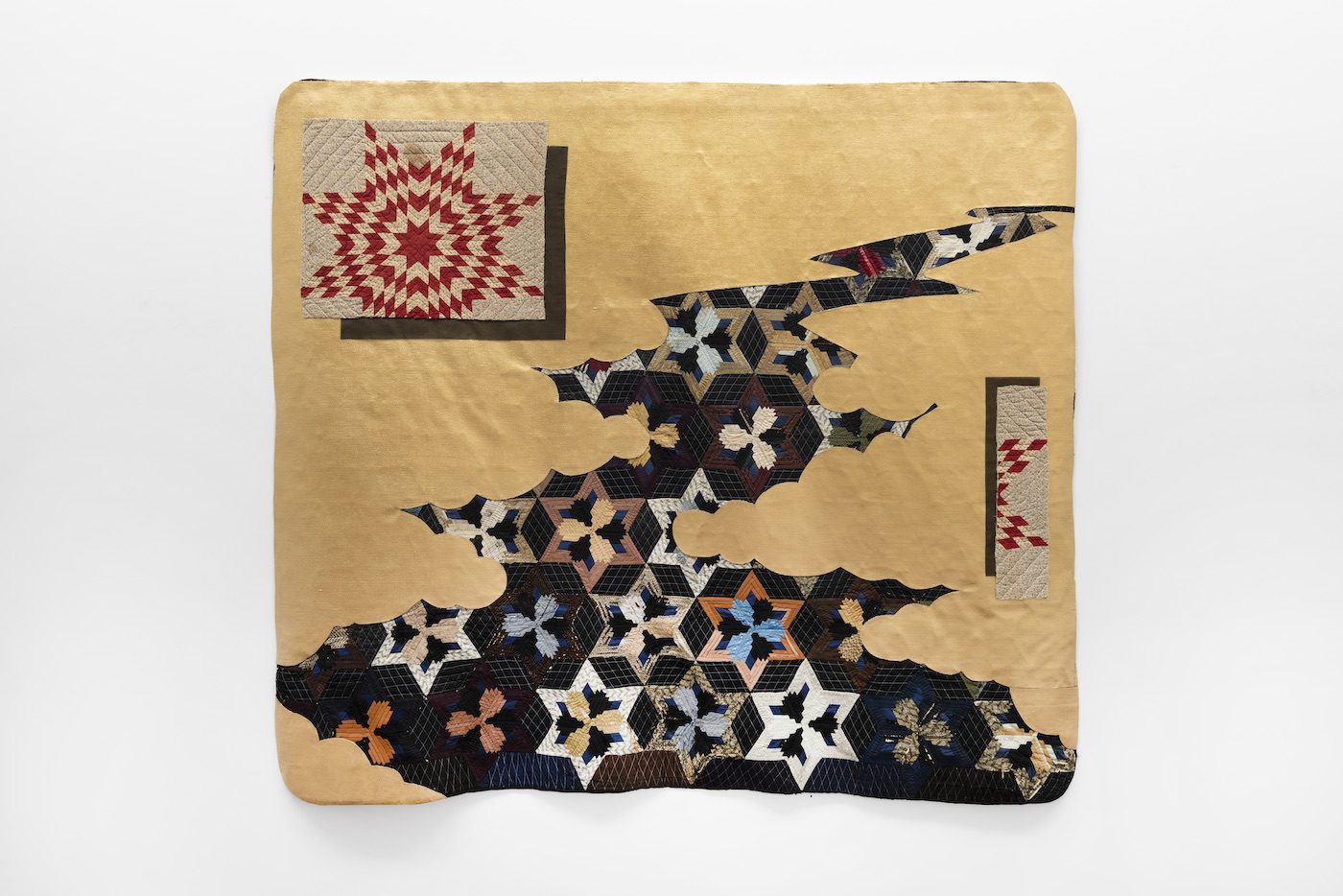 C&: It’s hard for you to be pinned down because you’re so multi-disciplinary.

SB: You could say the same for several artists, but for some reason if they’re white men using different materials and genres no one raises an eyebrow. But if it’s women or a person of color doing the same they’re asked: Why don’t you have one specific signature style?

C&: I was struck by your New Yorker interview where you mentioned that satire might be a difficult thing to achieve as a visual artist. And yet David Hammons’ recent show at Hauser & Wirth in LA made me laugh.

SB: Hammons knows how to create a power object, they code-switch on so many levels. With the most modest of means and materials he’s able to touch on so many expanded subjects and aesthetics, being one with them – conceptual art, formalism and so many other things. He’s sort of a magician in that way.

C&: I’m wondering about your choice of materials for the mandalas. Given their spiritual nature, it feels like you’re disrupting the traditional notion of them.

SB: When I did research on mandalas I read that sometimes they are not even depicted – not drawn, not painted, not made in sand. The monks remember the patterns and can represent them through movement and dancing and whirling through space. The mandala is not limited  to one specific form, it’s more of a mindset and a transcendental state of sorts. That’s why I refer to breakdancing because it was very close to me when I grew up. A circular based modality. Eventually learning about modern dance and various forms of ritual lead me down that path. But I think that’s what artists do: we’re able to see and compile things and run them through our own personal filters and sensibilities to create something new. Sometimes that challenges perceptions, and sometimes it inspires. I think if there was just one reaction to a piece of art then that is probably a failure. 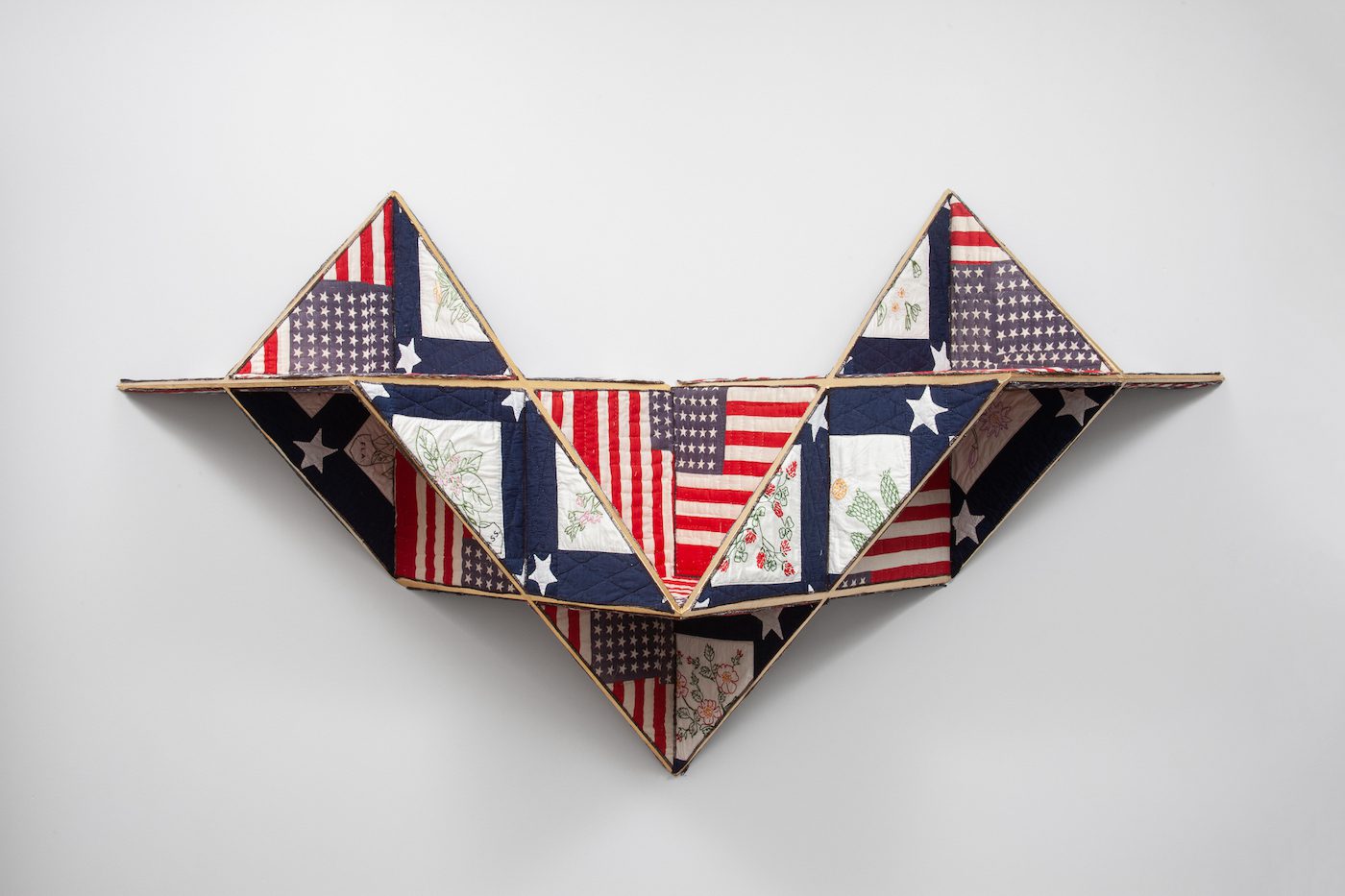 C&: What’s been the reaction to Cheshire, your Lewis Carroll inspired lip installation?

SB: Interestingly, I started doing the lips when I was in a residency in Germany. I started calling them Cheshire like the cat in Alice in Wonderland, so when I showed them in Europe, that’s usually how people relate to the piece. But when I showed the same work in the US, particularly in the south, people thought of Blackface minstrelsy. Every year there’s an entertainer who does something and offends a Black audience, who says that they are cooning and playing to a white audience making a buffoon of themselves. So minstrelsy has the ability to disappear and re-appear in its many forms. But it’s not just Black. I wanted that dichotomy to be read into a very simplistic pair of lips and teeth – as a funhouse gesture, as Lewis Carroll’s Cheshire cat or as Blackface minstrelsy. It code switches from a completely innocuous gesture to the sinister to the defamatory. It’s interesting to watch the context define the meaning as opposed to the piece defining any meaning.

Sanford Biggers has two New York exhibitions in the spring of 2020, a solo show featuring his new marble work at Marianne Boesky (April 30-June 13) and The Bronx Museum of Art (April 8-September 6) survey of his “Codex” series, Codeswitch, a touring exhibition curated by Antonio Sergio Bessa and Andrea Andersson, at Contemporary Arts Center New Orleans in fall 2020 and at the California African American Museum in 2021.

Sanford Biggers (b. 1970) was raised in Los Angeles and currently lives and works in New York City. He was awarded the 2017 Rome Prize in Visual Arts.

In Conversation with Leticia Contreras

Art in the Age of Social Emergency