In conversation with Jackie Karuti

Video still 'Lost In Trans(mission)' courtesy of the artist

Labyrinth is an exhibition by Jackie Karuti that explores the banality of life by use of repetition. It reflects a bored existence of being stuck in the same place, doing the same thing over and over again. Labyrinth was exhibited on January 22nd 2015 in Nairobi at Kuona Trust Gallery.

NN: It seemed that Labyrinth operated heavily as a metaphor. The people in the paintings who had police hats or prison bar codes on their coats indicated that both prisoner and imprisoned remain trapped; or the person walking but not moving through a signal transmission error on the television screen; or the door that did not lead outside but to a mirror. All that represented standardization, imprisonment, boredom, repetition and the lack of alternatives. It consequently denoted a morbid impossibility of redemption. Do you think that is why many people have responded with such interest to your exhibition?

JK: I’d like to think people have responded to Labyrinth because of my presentation of a body of work that is easily relatable to them despite the paradoxical nature of it. Nobody wants to believe that we are all stuck in a labyrinth with an exit that leads nowhere but people are very interested in the depiction of this theory and its possible explanations if there are any. Also my use of different media is definitely another reason. I say this with certainty because a lot of people commented on it. The art scene in Nairobi is overflowing with artists who only express themselves through painting in one form or another. It all gets a bit boring for me, and embracing new media has been the greatest adventure in my art career so far. 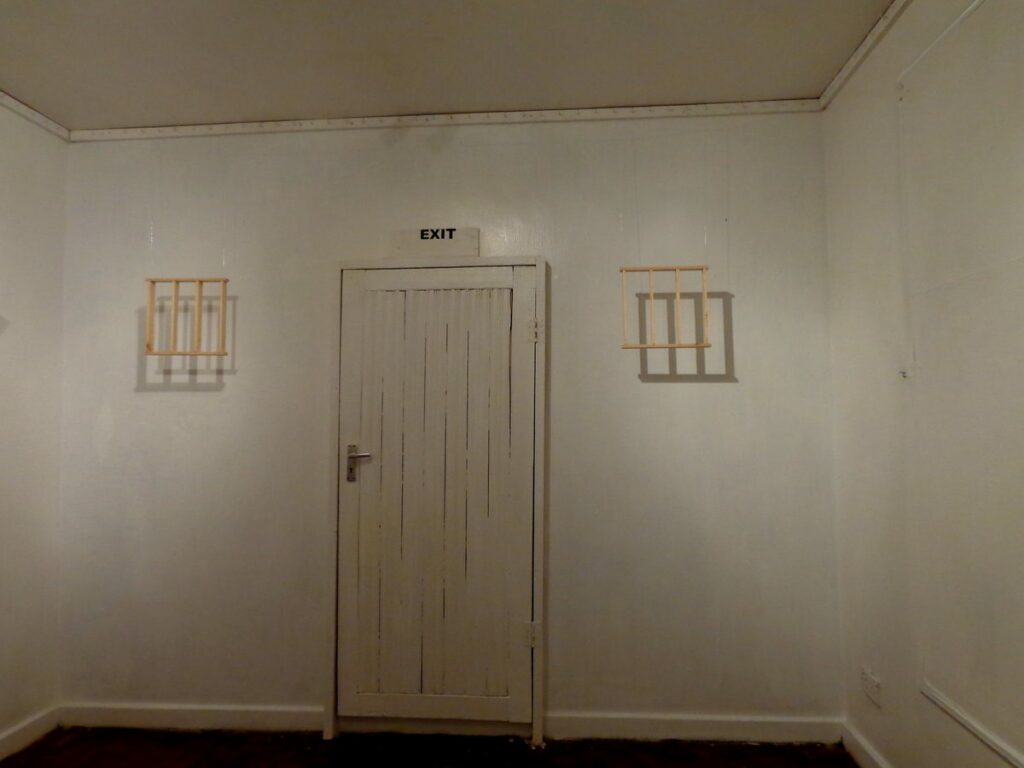 NN: The scene in the video installation that showed you sitting and writing notes in a white wardrobe next to a hanging belt seems highly related to your previous exhibition, A Great Perhaps. What would you say is the relationship between these two exhibitions or other works that are being conceived?

JK: A Great Perhaps, which was exhibited in Johannesburg, was really what should have come before Labyrinth. This is because the thoughts it elicits are what I believe would be the thoughts experienced by someone stuck inside a labyrinth. Repetition is one option for somebody wanting to exit the tangle and essentially that was what Labyrinth was all about. Doing the same thing over and over again just to survive. Suicide is another option. To some this would seem like an extreme, even unfair assumption but personally I think it is a fairly logical albeit morbid response to an unlivable life.

NN: You have used multi media to create the narrative or the question in your work. Painting, video, performance and installation have been synthesized in a way that provoked not just great interest but also participation from the audience. This multi-sensory and participatory elicitation has been critiqued as diluting the quality of the particular forms of art fused together.  What are your thoughts on this?

JK: Labyrinth was very much about me exploring and experimenting with different media. However, I disagree with this sentiment.  If anything the multi-sensory and participatory experience really enhanced the work. Whoever thought it diluted the quality of the work clearly did not engage with these different media. Firstly, the paintings led the viewer to the door installation and brought in color, which was a key element to this exhibition. Secondly, the video installation is a performance, so it should not be seen as two separate things. Lastly, Exit, which is the door, could only be experienced as an installation because one has to open said door to realize that it leads to nowhere. That is something you cannot quite capture in a painting for example. In the end, all these different forms eventually tell parts of the story but also tie in together to form a single coherent narrative.

NN: In many ways, your work speaks to the politics of the body and the mind associated with capitalized societies. However, it also speaks to people’s internal conflicts and discontents littered all over the history of the human. What inspired this particular exhibition?

JK: I’d be lying if I didn’t say this was personal. It is. But also inhabiting a very negative space in Joburg during the making of my earlier related exhibition, A Great Perhaps fueled my desire to continue and finally exhibit this work under the title Labyrinth.

More of the artist’s work can be found on her website, third room studios

Noosim Naimasiah is a PhD student at the Makerere Institute of Social Research in Uganda. Noosim’s work engages with  histories and politics within Africa and views Art as a critical lens through which we can see ourselves.