There is so much of ourselves

Our author Stefanie Jason caught up with Marvin Luvualu Antonio and Matthew Alexander King, whose work was part of “Nine Artists.” at Stevenson.

For part of the winter, the Stevenson gallery in Cape Town has been transformed into a space charged with striking images, sounds, and installations created by nine artists from Africa and the Diaspora. With a straight-up exhibition title, Nine Artists features the works of established and emerging artists including the renowned Cairo-born Iman Issa, celebrated Ephrem Solomon from Ethiopia and notable artist-photographer Paul Mpagi Sepuya, who is based in Los Angeles. Speaking about the show’s premise, Stevenson’s Robin Kirsten says: “Each artist has, in some way or another, a relationship to the African continent. As a gallery, this reflects our program, but our intention for this exhibition was to avoid the imposition of an homogenizing theme, and the prescriptive reading thereof. Doubtless the exhibition will be read as a whole, but that is up to the viewer. It is, like many exhibitions, an experiment.”

A week ahead of the closing of the show, I caught up with Marvin Luvualu Antonio and Matthew Alexander King, whose work is part of “Nine Artists.” The bold mixed media art of Canadian-based Antonio, titled Trash Talks, “explores relationships between the artist’s studio and the everyday,” according to Stevenson. Meanwhile, Capetonian King’s You Asked A Joke Question, But I Gave A Serious Answer [And So On] explores the concept of the gallery space using a program of scheduled and unscheduled performative gestures over the course of exhibition.

Stefanie Jason: Could you share how the concept of Trash Talks came about?

Marvin Luvualu Antonio: It was spurred by Philip K. Dick’s novel Do Androids Dream of Electric Sheep, specifically an invented term that kept being used: kipple. It refers to the detritus that covers the landscape and literally rains down on the human population in the form of dust. I liked how the characters had a neurotic relationship to kipple, which was this inescapable reminder of a past no one could either remember or had seen before. Their engagement with it raised questions about themselves and their world. So considering my affinity to found objects, I wanted to use the idea of kipple as a framework to engage with the landscape of Cape Town and its own archive of objects to produce a new site-specific body of work. I also thought the book made amazing analogies surrounding the idea of ‘the real’ in terms of humans’ relationships to replicas or what constituted real human connection. The androids made me think of sculpture or art in general in that sense. 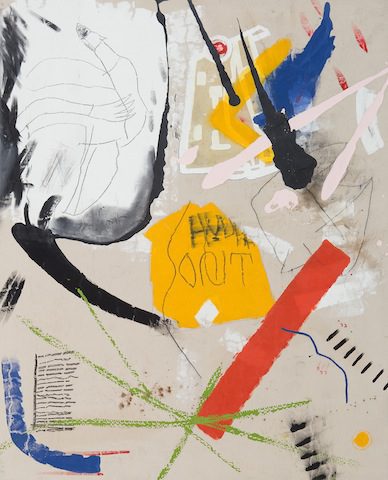 SJ: Why did you choose trash as a medium for your artwork?

MLA: Because there is so much of ourselves in our trash.

SJ: You are a photography student, and in 2014 you were awarded an AGO Photography Prize Scholarship. Was there a reason you departed from photography for this exhibition?

MLA: I didn’t exactly take a departure from photography for this exhibition or from my work. I consider my work to be quite reliant on images but I did decide to move away from a print-based mindset. I wanted to see how I could push my relationship with photography outside of the frame and into something more fractured and expansive. There are multiple references to images in the exhibition with the photograph of my mother, the sticker on the wall, the book, and literally via the paintings. The show is very much about looking.

SJ: You were born in Russia and currently study in Canada. Would you mind sharing a bit about your background? Did you grow up in St Petersburg?

MLA: I grew up there until the age of four. My mother was completing her studies in international economics at the University of Kiev, Ukraine, where she met my father and then relocated to Russia. My family is Angolan yet I grew up abroad. After St Petersburg, I lived in London, and then moved to Ethiopia at the age of nine. When I turned 13, I moved to Canada on my own, which is where I study. [Antonio is completing his BFA in Photography at OCAD University, Toronto].

SJ: Lastly, what are you currently working on?

MLA: I’m working on a project curated by Cheyanne Turions at the Jackman Humanities Institute at the University of Toronto. The institute invites scholars from various departments in the university and abroad to participate in academic exchange. It’s basically a laboratory for human culture nerds. Myself and a few other artists are producing site-specific installations that respond to their archive and to the existing architecture of the institute. I’m also getting riled up for an imminent solo show at Clint Roenisch Gallery and trying to remember that it’s summer, ’cause I keep forgetting.

SJ: What brought about You Asked A Joke Question, But I Gave A Serious Answer [And So On], and its title? And why did you choose performative gestures for “Nine Artists”?

Matthew Alexander King: The very prosaic start of this answer is that I was asked specifically to do performance work for “Nine Artists.” The title in your question is actually truncated. The full title of my section of the show is, You Asked A Joke Question, But I Gave A Serious Answer, or Very Uncertain Gestures, or ‘Did I Win?’ ‘No. But At Least You Got Four Feet From The Dock’. I have a fondness for very long titles, for their unwieldiness and so on. It’s also a fairly straightforward way of providing thematic cues. Or, at least I hope it’s straightforward. The ‘performative gestures’ come then from that kind of space. I’ve been preoccupied of late with thinking about performance art and where some of its ‘limits’ might be, and what it means to work up against them. The invitation to be on this show seemed to provide me with the time to try and do something useful somewhere along those limits. 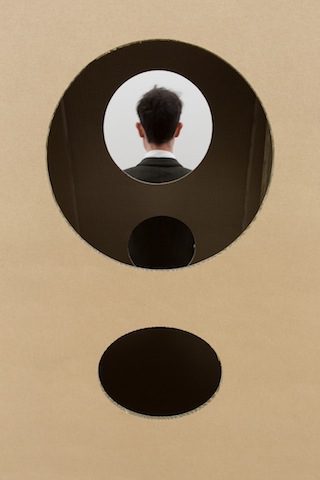 SJ: To audiences like myself, your presence at the gallery might have come across as peculiar and a bit strange (before you introduced yourself as one of the artists). Was that your intention?

MAK: Well, yes, sort of. I’ve often felt quite strange at the gallery, and so I guess some of that was going to be apparent in my presence there. I was glad about it, though. I think the feeling of strangeness is helpful in setting up the type of engagements that I was hoping to have with people. When it’s there, I think it helps elevate one’s sensitivity to one’s environment. I mean galleries are weird, and I think it’s good to keep that in mind.

SJ: What did you observe during your time spent at the gallery during the exhibition?

MAK: On the one hand my focus was not so much observation as it was engagement with people and the situation thereof. On the other hand what I have liked is when, in talking with people, we ‘come across’ some idea about a work that neither of us might have come to by ourselves. The value of that collaborative moment is (I suppose) an observation (a simple one, to be sure) that I have made, and that I hope is shared by the various people I’ve spoken with. (It is, perhaps, my main hope for what I’ve been doing.) I’ve also been really drawn to the gallery’s loose floor tiles.

SJ: Lastly, what are you currently working on?

MAK: I suppose I’m continuing to work on my project of not being useless. Part of that (I hope) is figuring out ways to make art and so on that make sense/seem right to me.

“Nine Artists”showed at Stevenson in Cape Town until July 18, 2015.

Stefanie Jason  lives in Johannesburg and is an arts and culture writer for South African publication Mail & Guardian. Her writing focuses on visual arts in South Africa as well as music.