Few concepts speak of the personal as political as well as the ideas surrounding "home" and "belonging". From home as a place of art, to the city as a place where everyone is a potential foreigner, this series includes texts exploring how artists and curators reveal and repurpose architecture, gendered domesticity, citizenship and spirituality through art. Our author Gauthier Lesturgie takes a closer look at the show STADT/BILD-Xenopolis curated by Simon Njami in 2015.

At a panel discussion with the artists of the show STADT/BILD. Xenopolis, which ran from 16 September to 8 November 2015, its curator, Simon Njami, opened with a rather disconcerting question, “What is home?”. What inevitably ensued were attempts at evasive answers and various biographical banalities on the part of the artists. Luckily, the exhibition itself gave us some aesthetic reflections on this question. With the concept of Xenopolis, Simon Njami opted to reflect on “home” via mirror image: the sense of being  “foreign.” By combining xenos, from the Greek for “foreigner,” with polis, Greek for “city,” he proposes an imaginary of the city as a place where we are all potentially foreigners, that is, participants in a fluid and fickle space, members of communities with hybrid identities. The sense of remoteness may also serve to produce imaginaries that are sometimes invoked precisely to help us feel “at home.”

The exhibition is one of four large-scale events in the collaborative project STADT/BILD: Image of a City, which brings together four Berlin institutions (1) to reflect on themes of the city and its representation. For the same occasion, these different events, and especially their accompanying texts, actively participates in the mythology of the German capital.

Simon Njami considers Berlin the quintessential xenopolis. The Paris-based curator built his discourse around his impressions of the city from various visits: impossibly fickle and full of “foreigners” from all geographies, Berlin is often described nonetheless as a kind of village writ large where everyone can feel at “home” at their own pace. The sense of being “foreign” includes many forms of ambivalence, both negative and positive. The works gathered in the space of the Kunsthalle, arranged very (overly) close to one another, observed a number of these viewpoints as they escape into an imagined Berlin.

Monologue Patterns (2005–2015) by Loris Cecchini are transparent structures in the recognizable shape of a recreational vehicle (RV) or caravan. Each structure contains a bed and potted succulent plants. The minimalist object suggests a habitat without being one: non-functional and totally transparent, these caravans by the Berlin-based Italian artist appropriated a familiar motif (the RV) but preserved only its shape, turning it into a site of rest and observation. Placed at the exhibition’s center, these two units immediately give us one of the common threads of Xenopolis: displacement as an essential parameter for a sense of “home,” which thus becomes an interior feeling detached from a precise location. 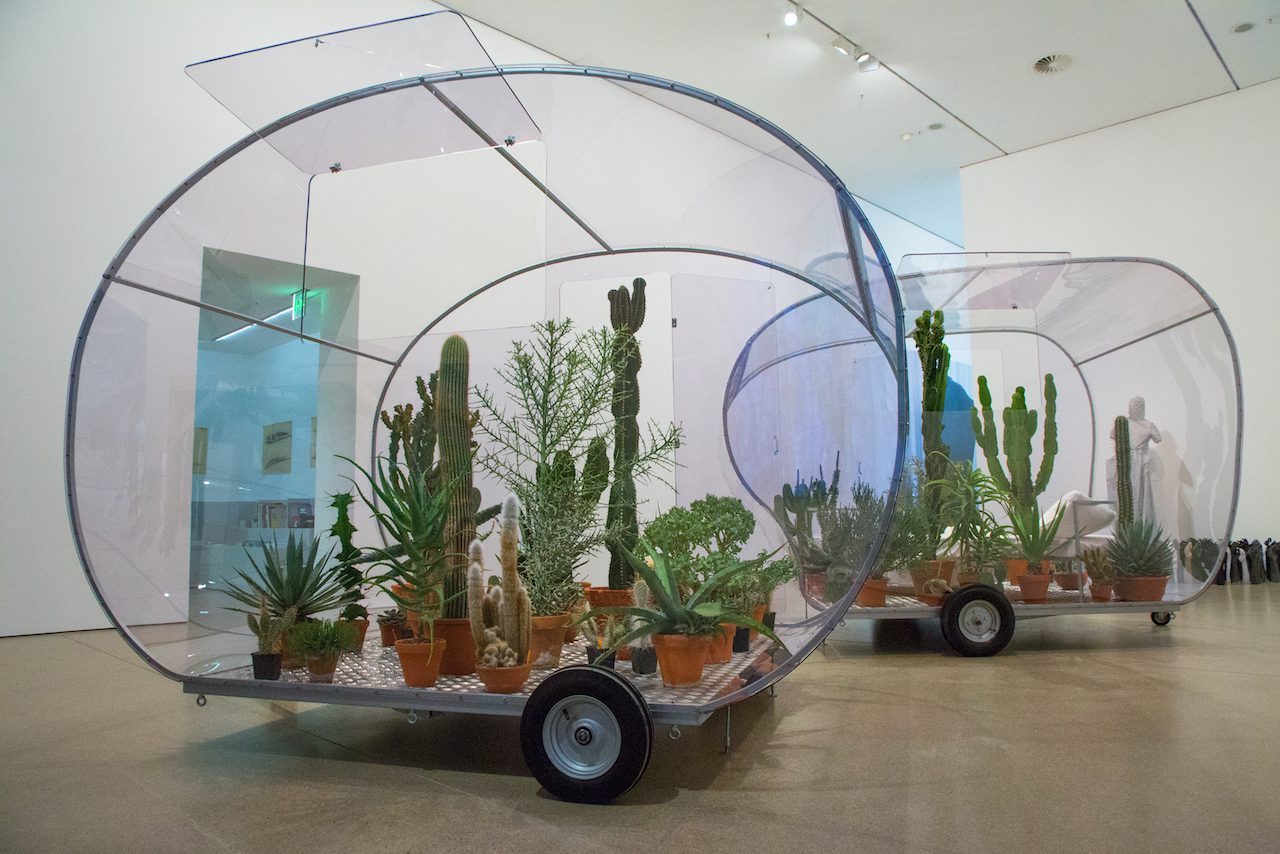 Equally “displaced,” the artist Theo Eshetu benefited from a one-year residency in Berlin. His monumental video Kiss the Moment (2015) is initially an aesthetic reaction to the large window in his studio. Positioned according to the four seasons, the 18  screens tiled mosaic-style convey an absolute ode to the eclecticism Berlin offers through the artist’s lively, autobiographical journal. Given pride of place in the exhibition, the piece manages to escape its anecdotal nature and thereby offer a reply to our original question, that of biography.

When she films other people, Laurence Bonvin chooses a precisely opposite strategy, placing herself in the role of observer, a foreigner or stranger to what she records, inviting circumstances in which her subjects, like herself, are displaced.

In the video Blikkiesdorp (2009), projected onto both surfaces of a wooden structure, a formal reminder of the film’s subject, Laurence Bonvin went to Delft, on the outskirts of Cape Town, to visit a “Temporary Relocation Area,” best known by its nickname of Blikkiesdorp, Afrikaans for “Tin Can Town.” Built in 2008, the “town” comprises 1600  cubical, sheet-metal structures aligned in crowded rows on a flat desert landscape. Each of the “houses” measures a total of 18  square meters and is shared by multiple residents, many of them expelled from other towns. The running water and hygienic facilities are shared by four units. Built by the government, the community officially called Symphony Way Temporary Relocation Area was intended as a stopgap solution but has since become permanent. Here we were confronted by the antithesis of “homeyness,” coziness, domesticity – the basic idea of a town – and this place provided the minimum elements to satisfy a town’s strict definition.

Laurence Bonvin’s camera is astonishingly gentle. Long static shots and slow tracking shots document an absolutely surreal setting where the inhabitants try to make lives for themselves, to invent spaces of intimacy: to feel at home despite the place’s hostility. The Swiss artist, once again based in Berlin, did not add a soundtrack to her images, leaving only the pop songs playing on the radio and the voices of the people in the film. Bearing in mind the questions posed by Xenopolis, Blikkiesdorp seems to be showing us different strategies used by people living in a site of extreme deprivation to invent a home for themselves: interactions with each other, music, objects with sentimental value, demarcating territory, etc. 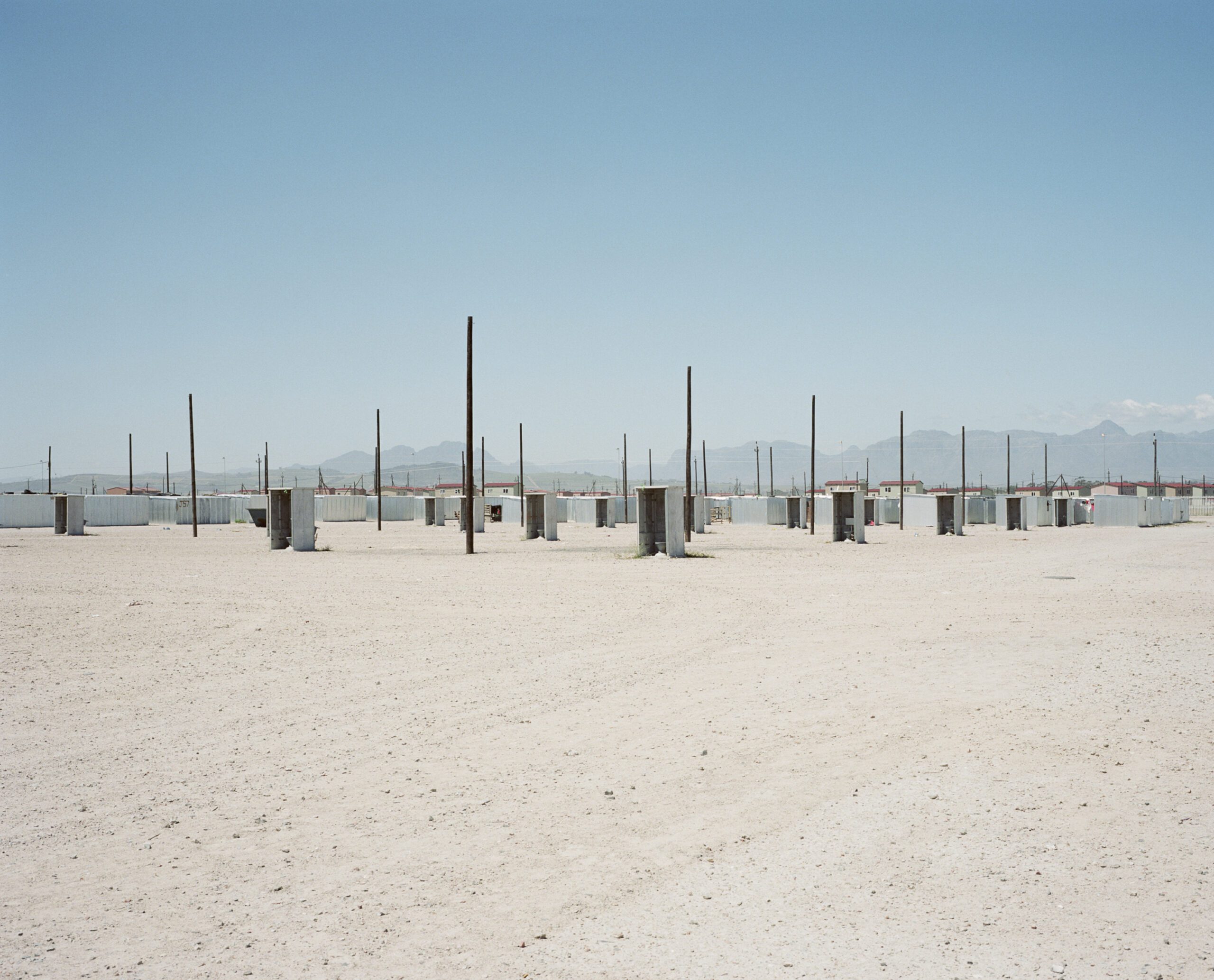 In his curator’s statement, Simon Njami develops his notion of Xenopolis drawing on Roland Barthes’s reflections on urban space as semiological space (2). The semiologist draws an analogy between a city and a language, citing Victor Hugo’s ability to conceive of a city as a piece of writing.

The curator places the individual at the center of his reflection: how the individual hears, understands, responds, and thereby changes the city’s discourse.

However, if the body is omnipresent in the artwork selected for the exhibition, spoken or written language remains strikingly absent. In Long Sorrow (2005), Anri Sala, the Berlin-based Albanian artist, films a performance by the free jazz saxophonist Jemeel Moondoc, supernaturally perched on the window of a high-rise building. The scene takes place in the vast Märkisches Viertel housing project in northern Berlin (built 1965–1974), nicknamed langer Jammer (long sorrow) by its residents. With different shots that keep us from seeing the larger housing project, we watch as the musician launches into a peculiar musical and very physical response (with the camera incessantly zooming in and panning around the musician’s body, so that we almost cannot tell what we’re seeing) to those cold concrete giants.

Long Sorrow is an ecstatic performance that offers a beautiful conclusion to Simon Njami’s aesthetic reflection: it escapes the architecture at evidence so as to place the individual center-stage. Here this individual, whether artist or subject, is a foreign body undergoing constant displacement, divulging her own stories in order to create her home, her city.

Gauthier Lesturgie is an independent art writer and curator based in Berlin. Since 2010 he has worked within several structures and projects such as the Galerie Art&Essai (Rennes), Den Frie Centre for Contemporary Art (Copenhagen) or SAVVY Contemporary (Berlin).

Intimacy and Exposure in an Age of Lockdown

When Water Becomes a Screen