A museum’s collection mirrors power: it shows the taste and assessment of directors and curatorial staff in determining what art belongs and what does not. A collection praises certain artists in order to restrain others from entering the exhibition space. It also materially canonizes specific art-historical moments that will function as signposts for generations to come. Museum Ludwig in Cologne is currently questioning conventional collecting cultures, starting with a critical examination of its own reputable collection of artworks from the US. The exhibition Mapping the Collection, curated by Janice Mitchell, presents us with art and artists that had been systematically excluded and sheds a different light on the responsibilities of art collections. Magnus Elias Rosengarten spoke to Janice Mitchell about her approach to the exhibition and how it can possibly affect Germany’s art and museum culture.

Contemporary And: An interrogation and revision of Museum Ludwig’s collection of art from the US is at the core of Mapping the Collection. Why is this an important and necessary move for a German museum?

Janice Mitchell: In Germany, we really need to think about who is represented in museum collections and how. And I hope this exhibition will contribute to that discussion. I lived in the UK for several years, and coming back to Germany and then entering the museum world here felt like I was in a time warp. Things are far from perfect in the UK, but discussions about representation and diversity in museums and the art world in general are much further along there and in the US. Germany needs to catch up!

Part of catching up is to question how we view our collections, how we present, how we curate. The history of many museum collections in Germany is really messy, but I think it’s ok to show that and be transparent. Curating is more than just taking care of a collection – it can be a tool for calling familiar histories into question, it can be a dialogue or even a collaborative approach to putting on a show and connecting with the audience. I think we need to be less didactic and strict and be more open to experimentation when it comes to exhibitions and how museums present their collections. I see glimpses and beginnings of this in many places, but more needs to happen. 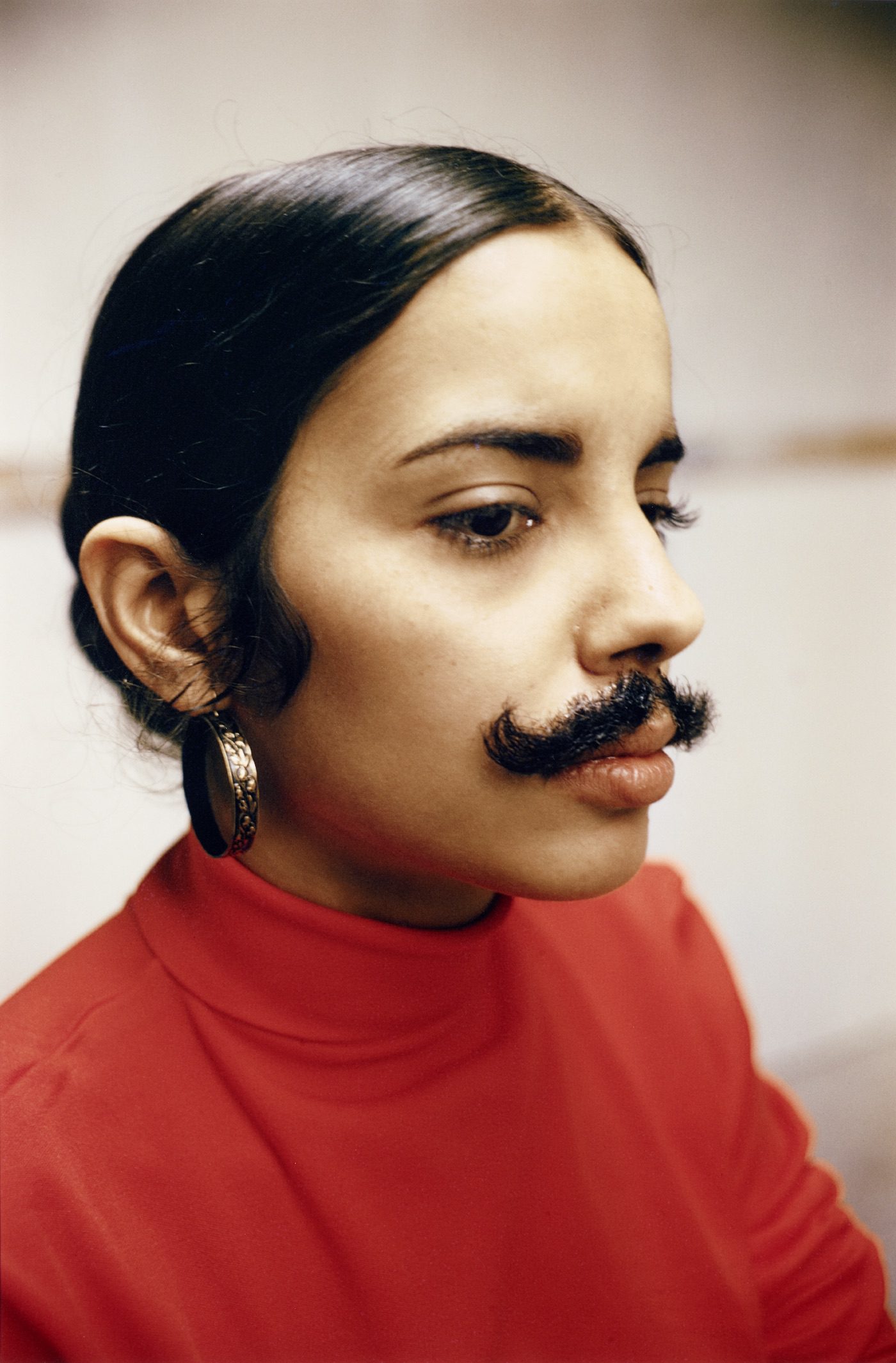 C&: The show predominantly focuses on the 1960s and 1970s, decades which stand for political turmoil on a global scale. In how far is Mapping the Collection characterized by that political dimension?

JM: Political events and societal changes are its focus. I believe that if you want to understand the artists of those two decades, you need to understand the historical background and political context. This applies to Pop Art just as much as it does to Conceptual Art – you can’t fully understand Andy Warhol or Senga Nengudi if you don’t know what happened in US politics and society in that period. The various parts of the Civil Rights Movement (such as the Chicano Movement and the Red Power Movement), feminism and the gay rights movement, but also events like the deaths of Martin Luther King, Jr. and of John and Robert Kennedy and Watergate are important moments in US history. They’ve shaped how the US sees itself as a nation, how others see it and what kind of country it has become. 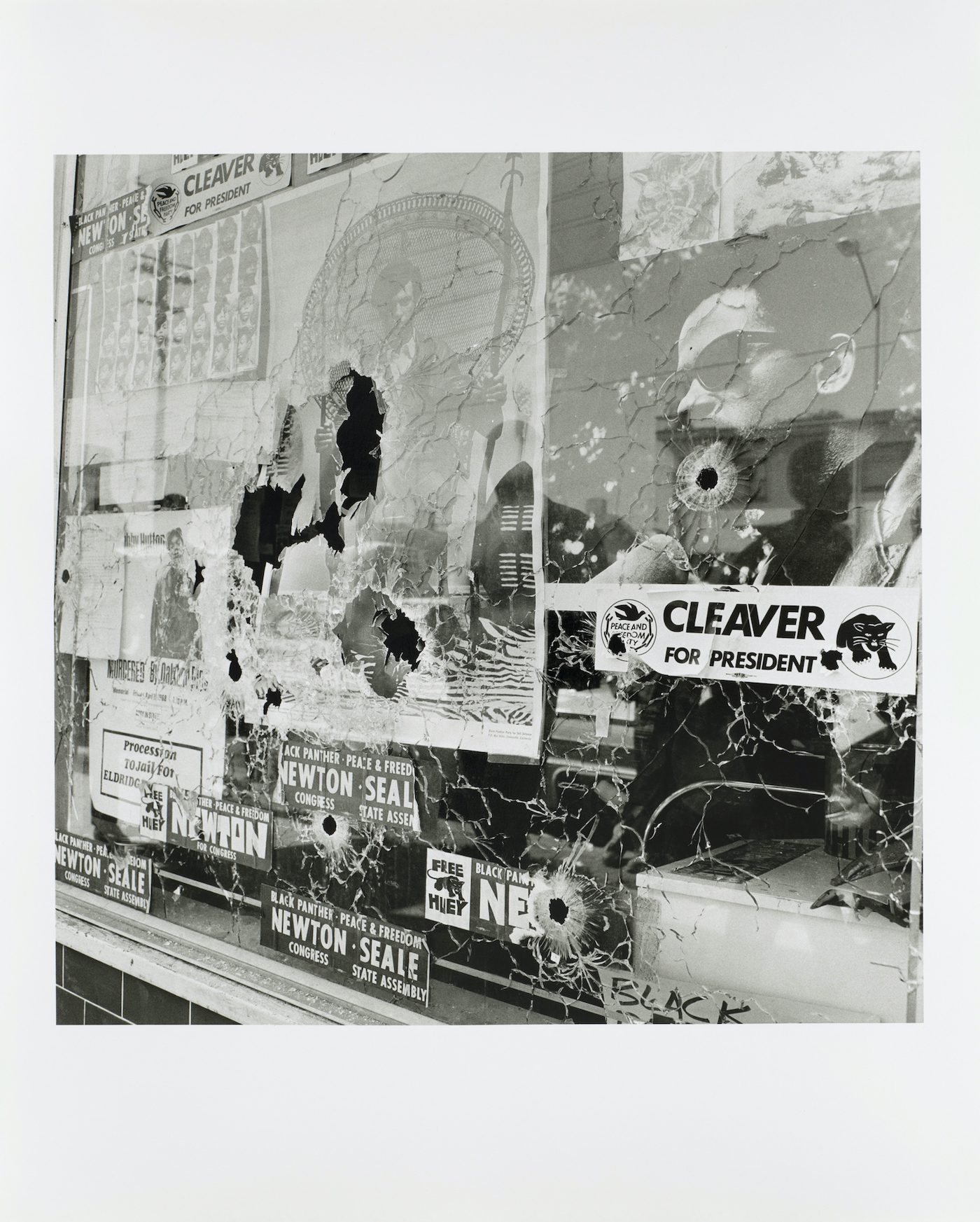 Pirkle Jones, Mirrored glass window of the National Headquarters of the Black Panther Party when it was destroyed by two bullets of Oakland police officers in the morning, 10.09.1968, from: Black Panther, 1968–1969 2010 deduction. Donated to the Pirkle Jones Foundation © Regents of the University of California Reproduction: Rheinisches Bildarchiv Köln

And these conflicts have still not been resolved. Racism, homophobia, transphobia, and sexism are all still huge problems in US society (and all over the world). The Equal Rights Act still hasn’t been passed, African Americans continue to face racism on a systemic and institutional level, Native Americans are still fighting for their rights and access to land, healthcare, and education. This has really come out full force again recent years, such as through Black Lives Matter, the activism surrounding the threat to abortion rights, and the protests against the Dakota Access Pipeline and on Mauna Kea in Hawaiʻi against the construction of the TMT Telescope. Looking back at the 1960s and 1970s in the US can be a learning experience in terms of what to do and what not to do.

C&: In Germany, Museum Ludwig is a pioneer when it comes to critical and honest examinations of its collection. Yet relative to other countries, there is still much work to be done. What are the biggest challenges you are currently facing?

JM: I think the challenge lies in having and continuing to have these discussions. They demand not only a critical examination of the museum and its history, but also a lot from you personally: you have to be willing to question yourself, what you know or think you know, and be open to criticism and learning from others. It also goes beyond curatorial work or research – it’s also about how we work together as a team in the museum. That can be hard, but it’s something that everyone at the museum is committed to. It can be challenging but it’s also very rewarding. You watch yourself and others grow. 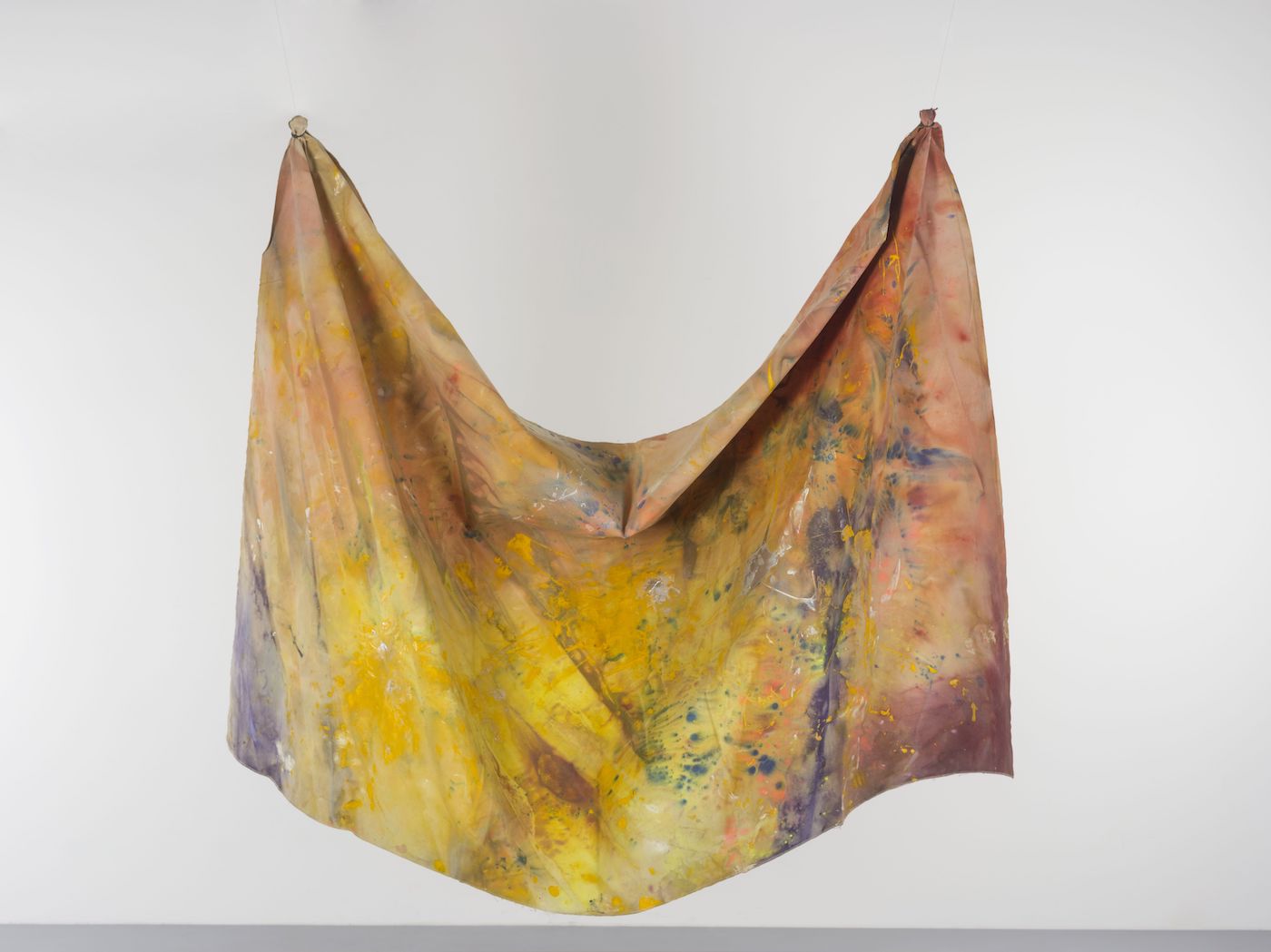 C&: What audience do you envision while curating a show?

JM: I don’t think of a particular audience. I try to think of what different people could find interesting or what they would want to know about the artists and the art. Different people find different things interesting about art, and I try to make sure that there is a little for everyone. For some, it’s about the aesthetics or how an artwork was made, the material used, the entire process from idea to production and installation. For others it’s more about the person who made the art – they want to find a personal connection to the artist. And then there are those who like facts, they want to see how a work of art relates to history or the society the artists lived in. I try to find a way to bring that all together. With this exhibition the emphasis is clearly on the historical and political background, which is what generally interests me the most as well. I’m really interested in art as activism or as a form of praxis. So that might be something I place a bigger emphasis on when I curate a show.

C&: What programming have you devised in order to help a more local audience identify with the rather US-centric art history canon presented?

JM: The current health crisis makes it unclear what is possible, and we’ll probably have to think of new ways to present the programming. I hope that guided tours will still be possible. We offer tours in multiple languages, including Turkish and Kurdish, and had planned a tour specifically for BIPOC (Black, Indigenous and People of Color). There is also a “Long Thursday” (Langer Donnerstag) planned for which we’re partnering with Dublab Cologne. They will do a live radio broadcast from the museum that will include music and literature as well as talks and film screenings. 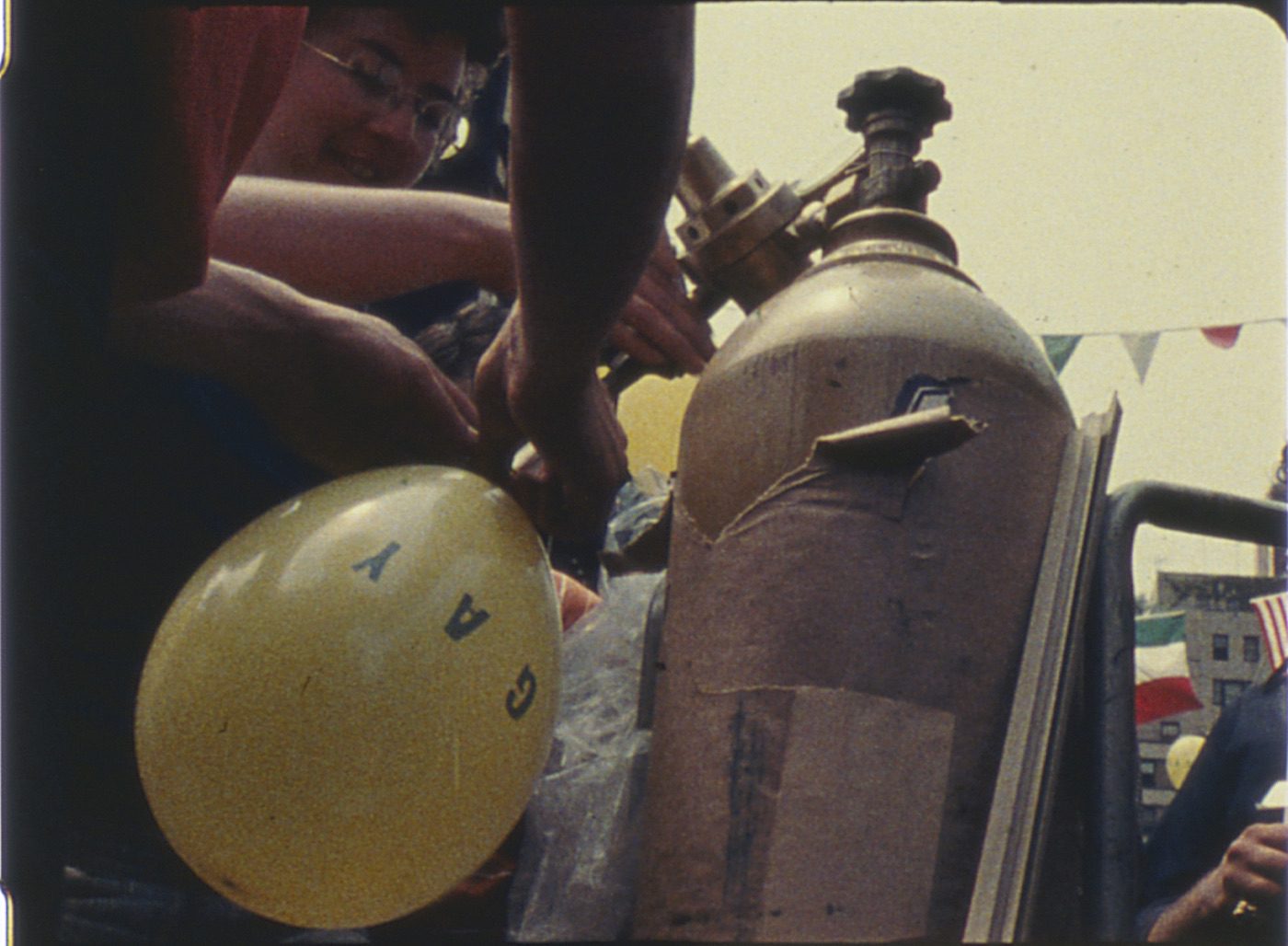 At the moment, I’m just looking forward to people visiting and enjoying the exhibition. I hope people will see similarities between their own experiences and those of the artists in the exhibition. A lot of these artists didn’t feel that they were fully part of US society, they were disenfranchised and marginalized. Some also didn’t feel fully accepted by their own communities for various reasons, from their sexuality to their way of expressing themselves. This is partly why I am drawn to artists like Adrian Piper, Ana Mendieta, David Wojnarowicz, or Asco. They lived in conflict with society, and they explored that conflict in their art and never backed down or gave in. They stayed true to who they were and stood up for what they believed in. That’s not easy and I admire that.

I also see a lot of connections between these movements in the 1960s and 1970s and the present day, for example between the American Indian Movement, indigenous activism today, and Fridays for Future.

Janice Mitchell has been working as a Terra Foundation Collection Research Fellow in American Art at the Museum Ludwig since July 2018. In addition to twentieth-century American art, her research interests are in contemporary art and critical artistic practice. Mitchell is a doctoral candidate at the Central Saint Martins in London.

In Conversation with Yilmaz Dziewior

Museum Ludwig: In Search of a Broader Audience in Cologne