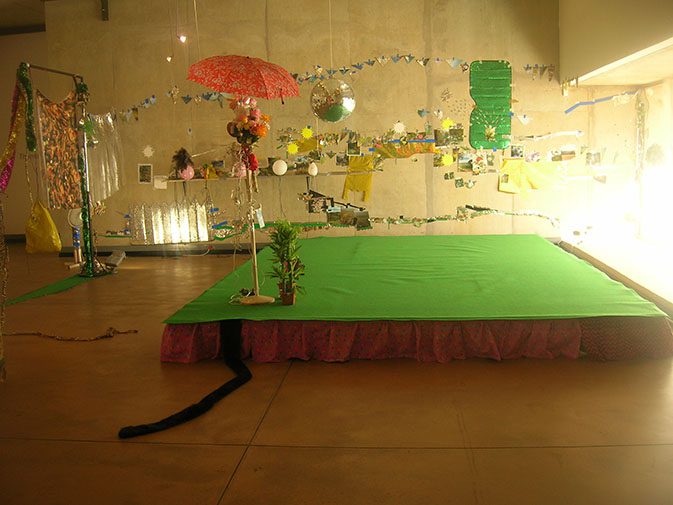 Dineo S. Bopape, 'grass green/sky blue (because you stood on the highest court in the land insisting on your humanity)', (2008). Courtesy: Stevenson

Dineo Seshee Bopape was born in 1981 in Polokwane, South Africa. She was the winner of the 2008 MTN New Contemporaries Award, recipient of a 2010 Columbia University Toby Fund Award, Future Generation Prize 2017 and the Sharjah Biennial 13 Prize.

Dineo Seshee Bopape is known for her playful, experimental video works and cluttered installations of found objects that explore the performative aspects of culture. In her video/installation work The Eclipse Will Not be Visible to the Naked Eye (2009), Bopape attempts to reconnect with her conservative South African hometown Polokwane after years of studying abroad. She films herself returning to Polokwane in a bright red dress that contrasts jarringly with her surroundings; viewers watch the video play amid an installation full of objects that suggest the trappings of suburban domesticity. Increasingly focusing her practice on time-based mediums, Bopape has in recent years explored virtual space in order to question, as she says, “If there is space within the virtual, how deep does it go? How far can a sound or an image recede?” Her more recent video works often comprise surreal mashups of both abstract and representational imagery—flowers and seascapes—combined with animation, found footage, and sounds.

Read
Shared
Akutia: Blindfolding the Sun and the Poetics of Peace

A conversation with the artist Dineo Seshee Bopape

‘The center is everywhere depending on your position’