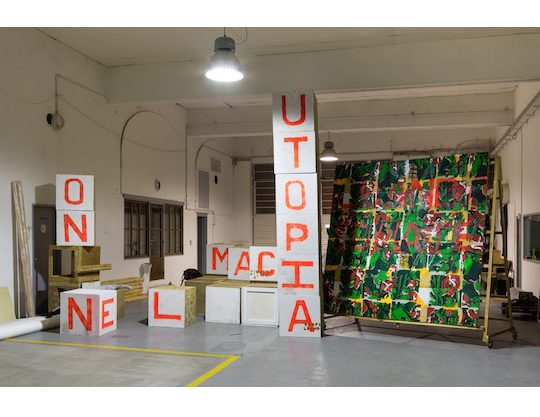 Francisco Vidal was born in Lisbon, Portugal, in 1978 and currently lives and works in Lisbon.

In 2010, he received his MFA from Columbia University School of the Arts, New York following the Maumaus Independent Study Program from Maumaus School of Visual Arts, Lisbon, Portugal in 2005 and a bachelor’s degree in Fine Arts from the School of Art and Design, Caldas da Rainha, Portugal, in 2002. He feels African even though he was not born on the continent and is a product of the African diaspora in Portugal. Francisco has been working on drawings, sculpture, and installation pieces to create a universe that is not easily classified, but whose continuity reflects his viewpoint and his development as a person. His works, in various formats, are the outcome of increasingly meticulous reflection on the reality he lives in. In parallel with his own practice as a painter, Vidal has played an instrumental role in fostering the visual arts scene in Luanda. In 2012, along with Rita GT, Antonio Ole and Nelo Texeira, he founded e-studio Luanda, a Luanda-based artists’ collective, project space, and studio complex that holds regular exhibitions and runs an art education program.

Francisco Vidal’s current practice revisits the modernist idea of technology as central to the dream of utopia, represented by the machine. Tiwani Contemporary will present a site-specific installation by Vidal, produced using his utopia machine: a standard-size plywood box containing an all-in-one toolkit for the mass production of screen prints, also functioning as a papermaking device.

Joined together, these paper tiles form a modular canvas, a cardboard skin that can cover infinite surfaces. The machine was born of a response to Vidal’s own experience of migration and the challenges faced by the modern, itinerant artist. In parallel with Francisco Vidal’s practice as a painter, he has played an instrumental role in fostering the visual arts scene in Luanda. Vidal is one of the most singular artistic voices to have recently emerged from Angola, and his work was part of the official selection for the Angolan Pavilion at the 56th Venice Biennale in 2015.