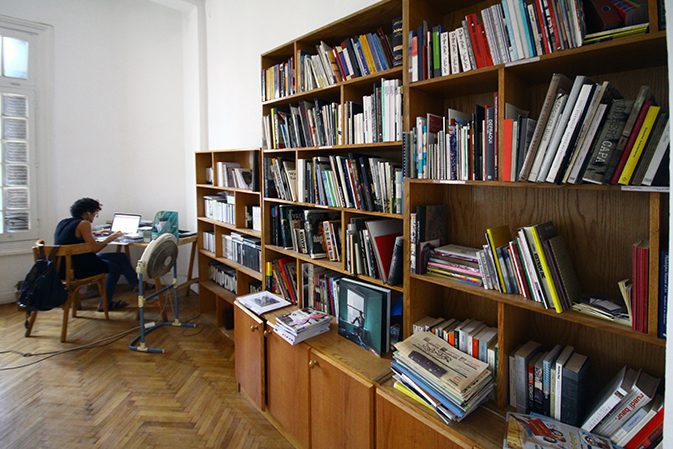 The library at the Contemporary Image Collective (CIC) in Cairo. © Mohamed El Maymouny

This limited edition artist’s book, available in either Arabic or English with various different covers, tells the story of the artist’s encounter with Mustafa, a young street vendor in downtown Ramallah who downloads images and sells them to the public. Mustafa’s family has always worked in the photo business, bringing images from China, Lebanon, and Syria into Palestine. Compiling the images Mustafa has left over from the past six years, the book looks back at moments in contemporary Palestinian popular and political history. Each book has one of Mustafa’s original images stuck in its pages. Shuruq Harb is a visual artist and writer based in Ramallah, Palestine.

Susan Sontag – On Photography (2008)
An Arabic translation by Afaf Abdelmoaty of Susan Sontag’s classic 1977 collection of essays on politics and photography.

The Art of  Shelving

Rufoof, which means “shelving” in Arabic, is a recently initiated library catalogue system initiated by the Contemporary Image Collective (CIC) in Cairo. It will soon create a great, joint online catalogue with books from local art libraries. The first 4000 publications have now been catalogued and the platform will be launched on Tuesday, 21 May.

At the Contemporary Image Collective you always find someone working in the reading room, and sometimes you’ll find the space busy with a workshop or talk. It’s not far off what CIC’s erstwhile artistic director Mia Jankowicz called the “typical art institution dream of people reading and discussing.” I spoke to Jankowicz in the last few weeks of her role at CIC, which has been completing the final stages of Rufoof’s development since her departure.

When Jankowicz arrived at CIC she found its small book collection in a closed room, even as there was almost no public access to good contemporary art books in Egypt. Three years later, the library and reading room is at the center of CIC’s new space in downtown Cairo and, more crucially, CIC has pioneered an integrated library system which is enabling local art libraries to create a comprehensive, joint online catalogue. It’s called Rufoof, which means “shelving” in Arabic. So far the collections of CIC and the Townhouse gallery – altogether around 4000 art books, videos and ephemera – have been catalogued.

The project is funded by British Council Egypt, while the Cairo-based non-profit Arab Digital Expression Foundation – a network of artists, educators, techies and experts which specializes in supporting and mentoring young people in the Arab region – have developed the software as open-source, pro bono. If you a search using the keyword “photography”, you can now locate hundreds of books as diverse as an Arabic translation of Susan Sontag’s “On Photography” and the Arab Image Foundation’s beautiful “Memory Game.” Potentially, this easy-to-use system will help increase art book readership in Egypt. What’s more, Rufoof helps institutions organize what they have and ask for more. Jankowicz said that CIC can now make a more convincing case for book donations, and people’s new generosity is helping fill in gaps where prohibitive costs mean the gallery cannot buy key books.

To help other libraries join, CIC provides a document for devising call numbers, plus a time estimate, advice, and volunteers. The new space Beirut , run by Sarah Rifky, Jens Maier-Rothe, and Antonia Alampi, is next and the American University in Cairo is interested, but CIC wants all significant art-related collections in Egypt to join. “There’s no reason not to have everyone else’s catalogues on there, and to see the books as a common resource,” said Jankowicz, who first mooted the idea in 2010. “From the position of someone who runs an art space it’s always a question of how the structures we have are artistically relevant as much as the actual content of what we do.”

In what Jankowicz called a “beautiful fundraising moment”, Rufoof was able to access funds from the British Council after the institution’s former librarian, Cathy Costain, was hired as its arts programs director. “Then ADEF put out a call for supporting digital projects, so I was like ok, technological support on the one hand and money on the other – that came together really nicely.” Currently Rufoof lists title, author, location, format and call number, with more information for some titles. The plan is to consistently add up to five keywords and subject. At the time of our conversation, Jankowicz was keen to improve the look and feel of what was at that point a fairly simple interface.

“It’s already a drag to have to go and sit in a slightly alienating art institution, you’d have to be super-motivated, so you have to make it as easy as possible,” she says. “If it looks complicated it alienates people.” The funding has covered staffing, book buying, and workshops. Artist Shuruq Harb ran a workshop and one by photographer Ronnie Close became a reading group that met regularly in the library for over six months, in line with Jankowicz’s idea that free interlocution across the library and CIC programming would be a valuable asset. Some of the money for acquisitions goes on ad hoc reading materials that come out of such workshops. “I think one of the biggest criticisms of CIC is generally that it is not broadly community responsive. One of our first audiences is the artists and our first service provision is to artists, and that’s something we stick by quite clearly, but I feel like this project answers those critics quite well,” said Jankowicz. “I want to think of community provision on the level of infrastructure, rather than it being a preferred taste or style of artistic production.”

Mia Jankowicz has now left the position as artistic director of Contemporary Image Collective to pursue freelance writing and curating.

Jenifer Evans is an artist, writer and co-initiator of Nile Sunset Annex, Cairo.