In Conversation with Nikita Gale

Sound is an intimate medium to California based artist Nikita Gale. In her current exhibition DESCENT, which explores ideas of identity through various media, it is intrinsically linked with the sensations of touch and sight. With C& Gale speaks about artistic boundaries, the burden of transparency, anonymity, and how she wants to challenge perceptions by manipulating spaces with her industrial installations.

Contemporary And: Édouard Glissant’s notion of opacity plays an integral part in your current exhibition. How can the Black subject deal with the idea of ridding oneself of the burden of transparency?

Nikita Gale: I’m at a point in my practice where I’m circulating between two different manifestations of opacity: I’m invoking it by responding to the demand for transparency with a line of questioning, and I’m also invoking it by not responding to the demand at all, or at least not in any way that legitimizes the request. Of course, these strategies carry with them certain risks – as antagonism towards systems of authority typically culminates in some form of punishment or retaliation. However, I do believe that there are strategies available that can assist in how one might be able to navigate and produce a response to the calls for transparency that are typically demanded of those of us with precarious relationships to authority. 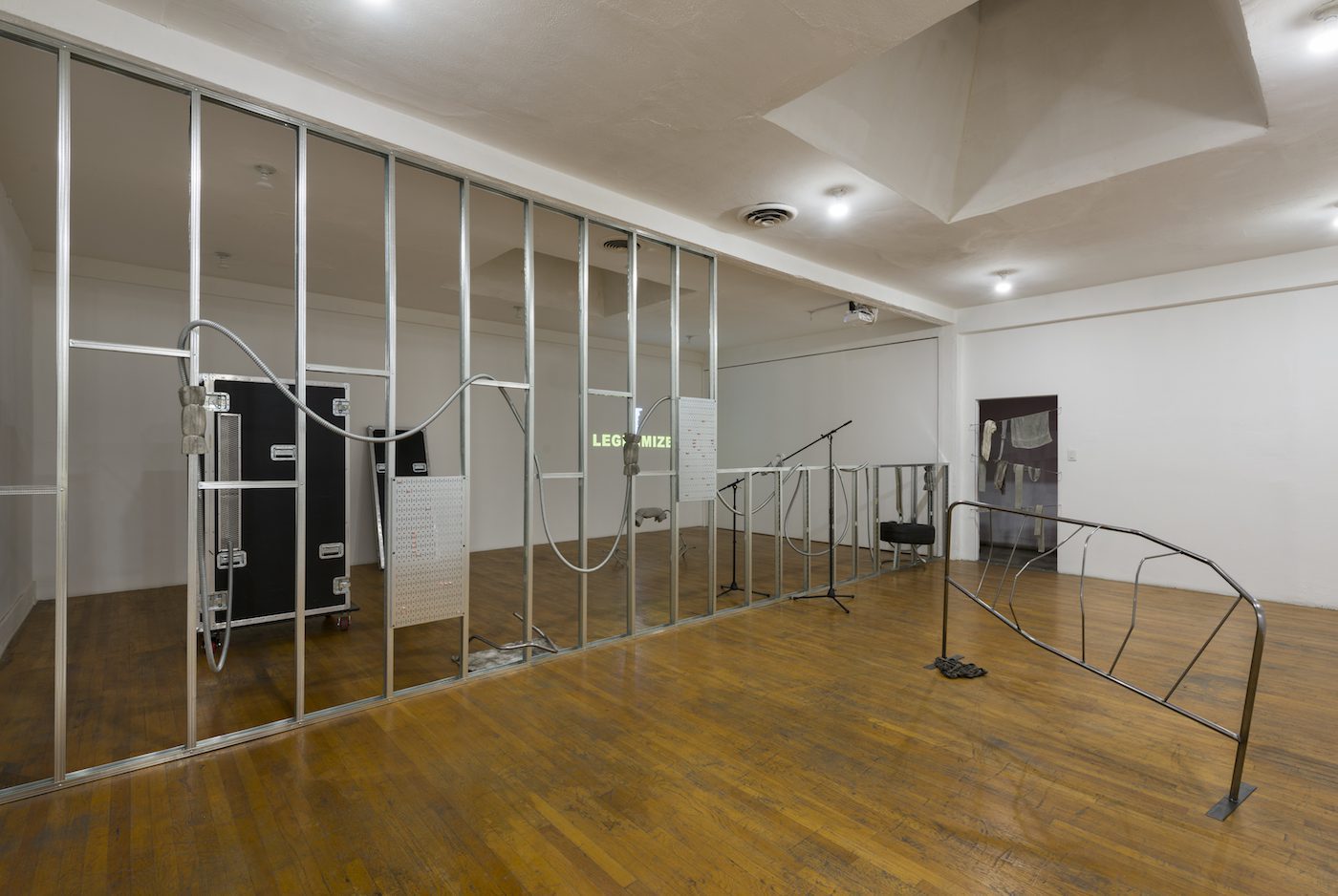 To answer your question more directly, I would refer to a quote that I encountered by way of my friend and writer Dayo Olopade from the Belgian philosopher Raoul Vaneigem: “People who talk about revolution and class struggle without referring explicitly to everyday life, without understanding what is subversive about love and what is positive in the refusal of constraints, such people have a corpse in their mouth.” The burden of transparency is one that works both internally and externally. The compulsion to name and to identify is inflicted externally by systems of authority, but it is also enacted by individuals through conditioning. Think of the ways in which – to borrow the phrase from Michel de Certeau – we can analyze our “practice of everyday life” to find the moments in which we voluntarily engage in transparency and authorize and allow other systems to name us.

C&: In the past you’ve voiced your views on “technology eclipsing human interaction.” Could you speak more about this, especially in relation to your exhibition?

NG: That was a funny way for me to word that! I must have been working through ideas around mediation and the ways in which tools and the resulting cyborgian arrangements between humans and technologies continue to determine how identities are formed and how they subsequently relate to their environment.

To relate this idea back to DESCENT, I’d say the most succinct way of explaining the relationship between technology and identity would be to look at language. And to not only look at language but to also think about it as a technology – truly one of the oldest technologies in use by mankind. If language can be thought of as a technology, then the system of naming – specifically as it applies to genealogy, patriarchy, and colonialism – can be implicated in this argument that I’m forming in DESCENT. It’s an argument, which broadly considers the ways in which materials and technologies, like language and barricades, can literally and figuratively determine how a person is authorized or prohibited to move through the world. 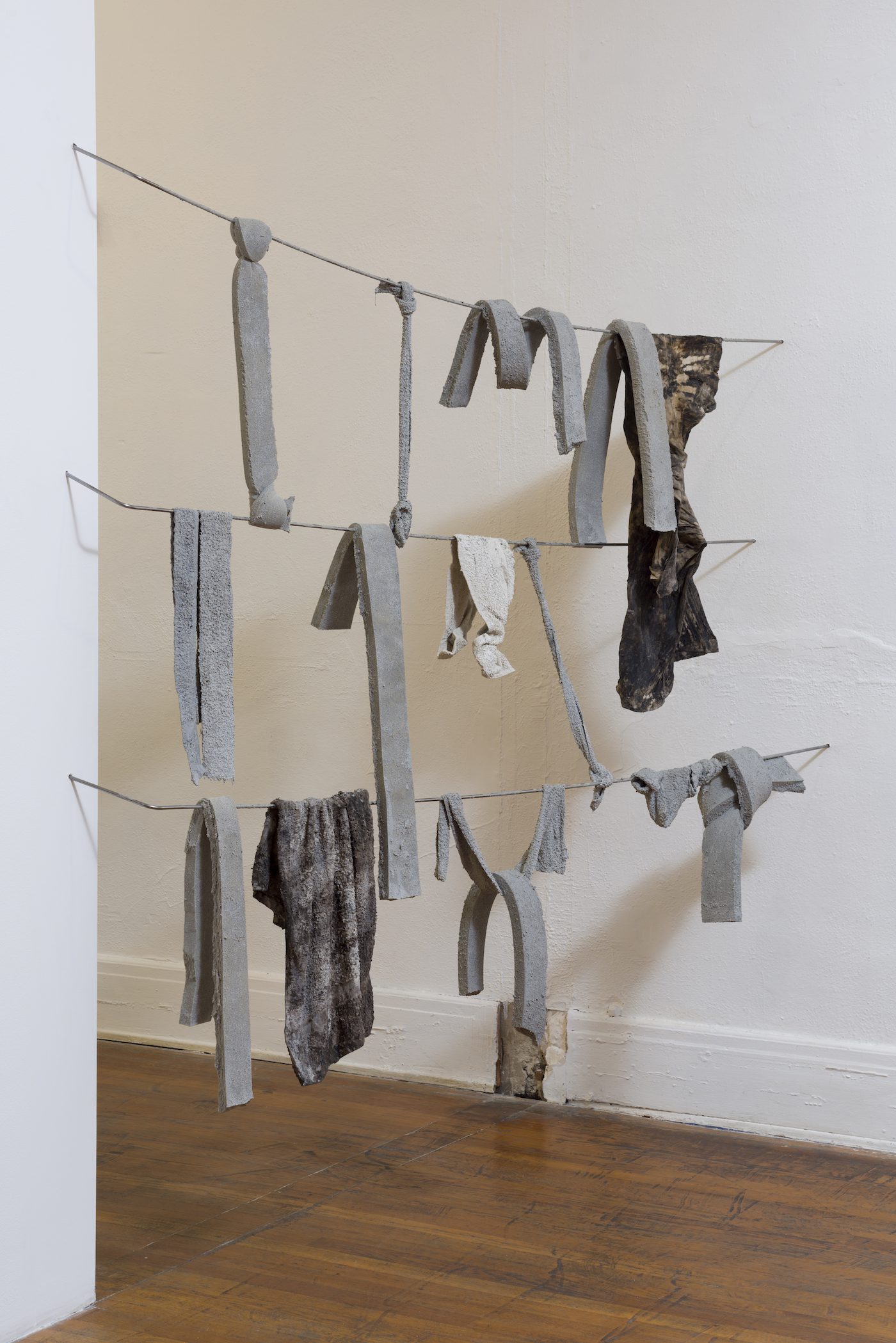 C&: A haptic approach also seems to be an important aspect of how you build agency in your work. How do you create a space which engages the viewer’s sense of touch?

NG: Sound is haptic. It’s an intimate medium that engages our sense of touch in minute and incremental ways. To experience sound is to experience touch; this is why things get really interesting for me when we start to talk about how both these subjects relate to agency. Sound infiltrates, it penetrates, it doesn’t ask for permission, it radiates and reflects.

The way that I work with sound – and language – in my videos involves an engagement with how an individual can assert agency when they shift between hearing and listening and between seeing and reading. There are instances in video works when text, either written or spoken, repeats or is distorted to a point where it begins to function more as a texture or an ambient background element.

C&: Was there an intentional manipulation of the space in DESCENT SCREEN, to distort the perception of backgrounds and boundaries?

NG: In DESCENT SCREEN, the piece is a large, porous structure comprising an aluminium frame typically used as a substrate for the installation of drywall for wall building. Beyond this physical frame, in the inaccessible space on the other side, there are additional sculptures as well as a modestly sized video, which is projected on the far wall of this inaccessible space. When you watch the video, your body engages with this physical “screen” that separates the space. So DESCENT SCREEN, much like a television screen or projection surface, is a physical limit despite representations of objects or space on the “other side.” 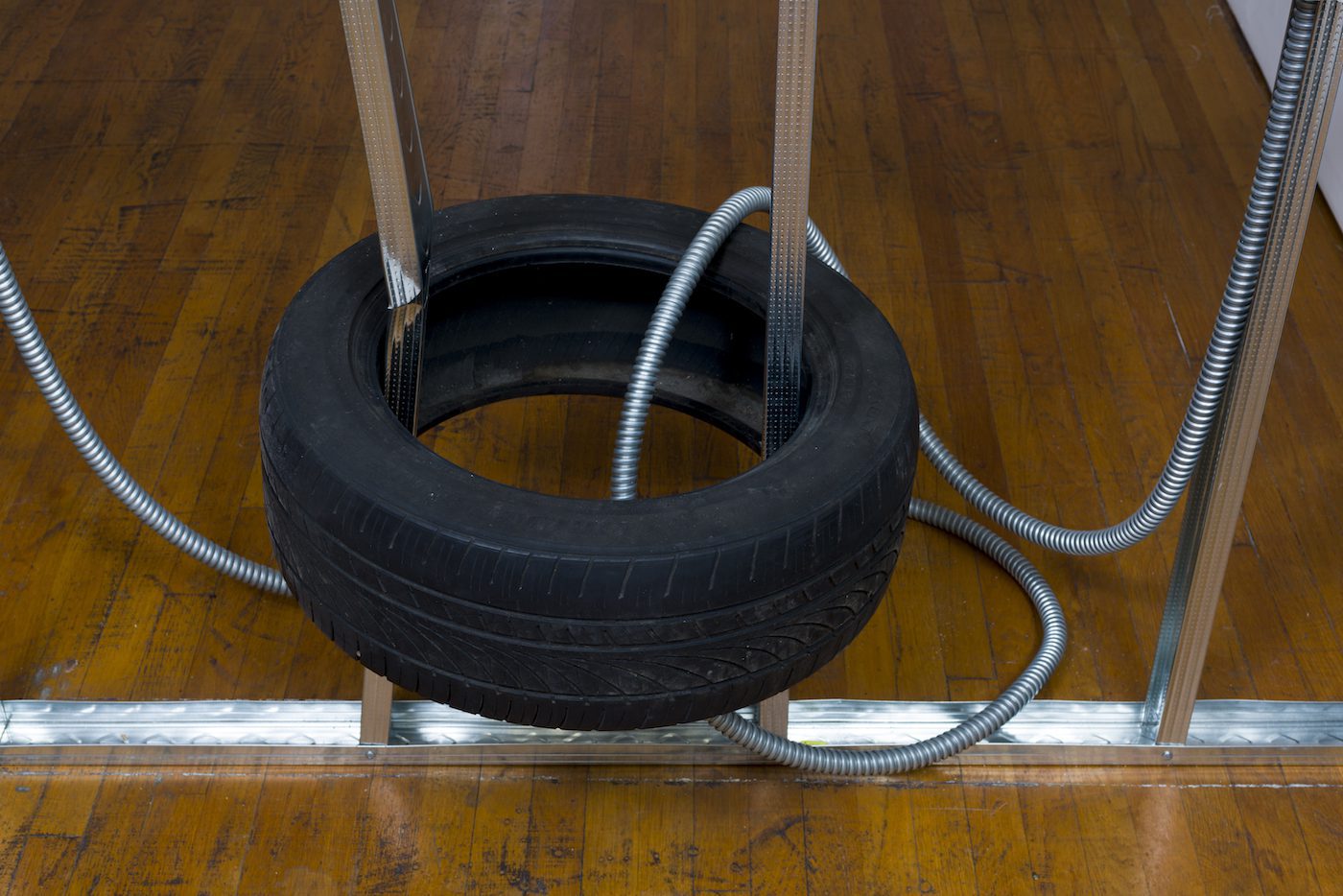 As someone who works with video and sculpture, I am often conflating dimensions. Typically if I find myself installing a projection in a space, the video will either be projected onto some fabricated surface or installed in a way that does something phenomenologically weird. When a video is projected onto a wall, which is a fairly common practice, the wall functions architecturally and practically as a division of space and at the same time as a surface onto which representations of cinematic space are projected.

C&: There seems to be a certain desire for anonymity in this exhibition, almost for a loss of a self. Can you expand on this idea?

I don’t think there’s a desire for a loss of self, but there is a push toward a condition of de-individualization and anonymity that comes by way of allowing yourself to be absorbed into a larger, more abstract configuration; this is totally antagonistic to the kind of obsessive move towards transparency that we are seeing infest global politics. We are seeing a turn not only towards fascism but towards a complete and shameless intolerance for the complex or illegible.

In this context I also find it interesting to think about anonymity in relation to something like blockchain technology, which really promotes transparency and traceability as its foremost selling point. Every action is so thoroughly documented that it produces a field of infinitely unique transactions. It’s about documentability and individualizing, which is how power and authority are maintained – through a kind of incessant separation and individualizing. It’s a type of organization that makes others – the political organizing of communities and groups for instance – more difficult if not impossible.

Anonymity is a refusal to identify or to take a name or be named. In a sense it is a return to a state of abstraction, and that’s what I’m more interested in: anonymity, the refusal of inheriting language or names, and abstraction.

Nikita Gale’s exhibition DESCENT at Commonwealth and Council, Los Angeles, is on view until 3 November 2018.

Intimacy and Exposure in an Age of Lockdown

David Shrobe: Somewhere in Between

A Solo Retrospective on Belkis Ayón

A Woman of Hard Surfaces