Hundreds of independent art and museum spaces were forced to close due to the Corona-Crisis. In this series we are celebrating the fantastic artistic events that are right now sitting behind closed doors. 3 & 4 Will. IV c. 73 at Institute of Contemporary Arts, London, is Cameron Rowland's first solo exhibition in the United Kingdom. 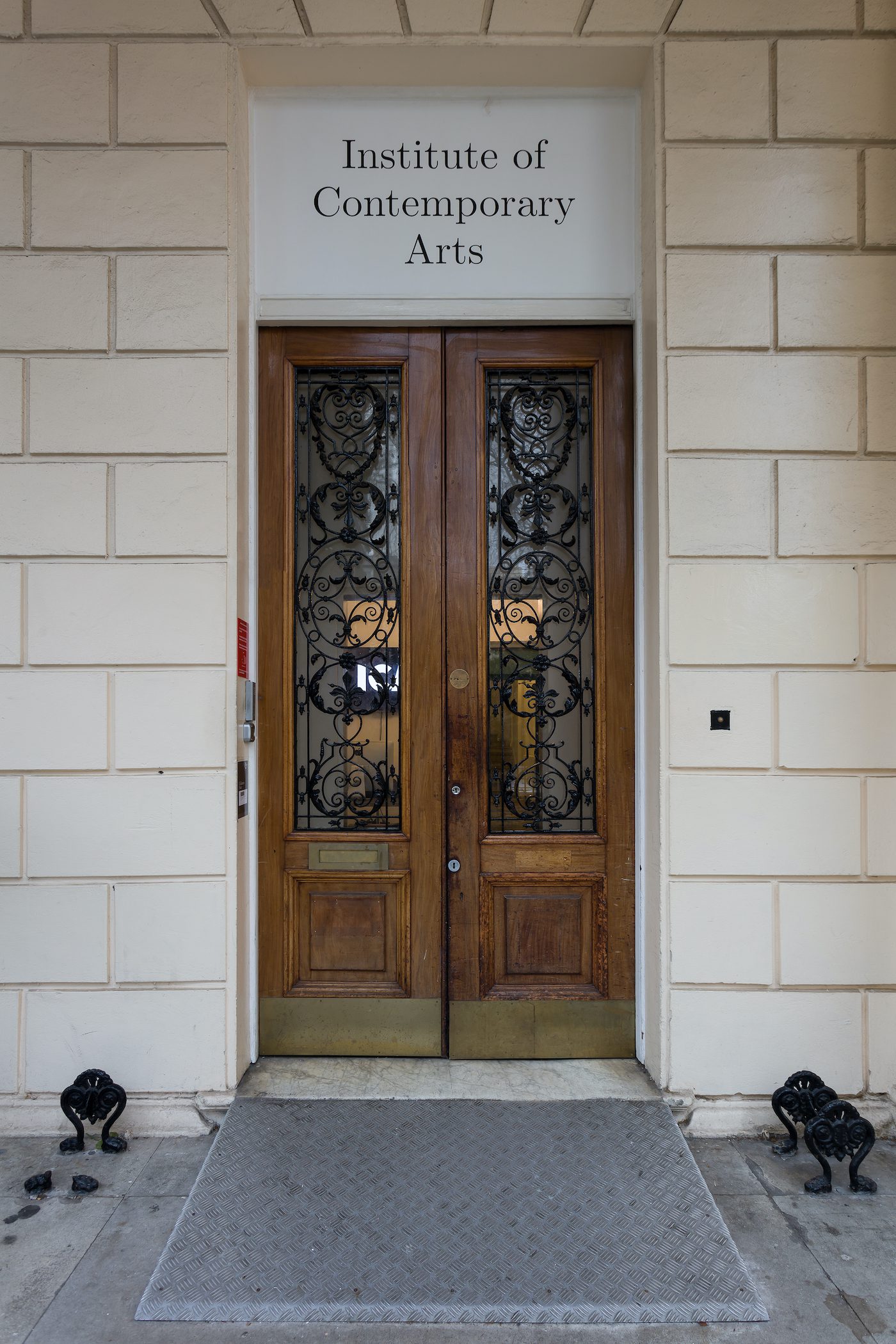 Cameron Rowland Encumbrance, 2020 Mortgage; mahogany double doors: 12 Carlton House Terrace, ground floor, front entrance.
The property relation of the enslaved included and exceeded that of chattel and real estate. Plantation mortgages exemplify the ways in which the value of people who were enslaved, the land they were forced to labor on, and the houses they were forced to maintain were mutually constitutive. Richard Pares writes that “[mortgages] became commoner and commoner until, by 1800, almost every large plantation debt was a mortgage debt.” Slaves simultaneously functioned as collateral for the debts of their masters, while laboring intergenerationally under the debt of the master. The taxation of plantation products imported to Britain, as well as the taxation of interest paid to plantation lenders, provided revenue for Parliament and income for the monarch.
Mahogany became a valuable British import in the 18th century. It was used for a wide variety of architectural applications and furniture, characterizing Georgian and Regency styles. The timbers were felled and milled by slaves in Jamaica, Barbados, and Honduras among other British colonies. It is one of the few commodities of the triangular trade that continues to generate value for those who currently own it.
After taking the throne in 1820, George IV dismantled his residence, Carlton House, and the house of his parents, Buckingham House, combining elements from each to create Buckingham Palace. He built Carlton House Terrace between 1827 and 1832 on the former site of Carlton House as a series of elite rental properties to generate revenue for the Crown. All addresses at Carlton House Terrace are still owned by the Crown Estate, manager of land owned by the Crown since 1760.
12 Carlton House Terrace is leased to the Institute of Contemporary Arts. The building includes four mahogany doors and one mahogany handrail. These five mahogany elements were mortgaged by the Institute of Contemporary Arts to Encumbrance Inc. on January 16th, 2020 for £1000 each. These loans will not be repaid by the ICA. As security for these outstanding debts, Encumbrance Inc. will retain a security interest in these mahogany elements. This interest will constitute an encumbrance on the future transaction of 12 Carlton House Terrace. An encumbrance is a right or interest in real property that does not prohibit its exchange but diminishes its value. The encumbrance will remain on 12 Carlton House Terrace as long as the mahogany elements are part of the building. As reparation, this encumbrance seeks to limit the property’s continued accumulation of value for the Crown Estate. The Crown Estate provides 75% of its revenue to the Treasury and 25% directly to the monarch. 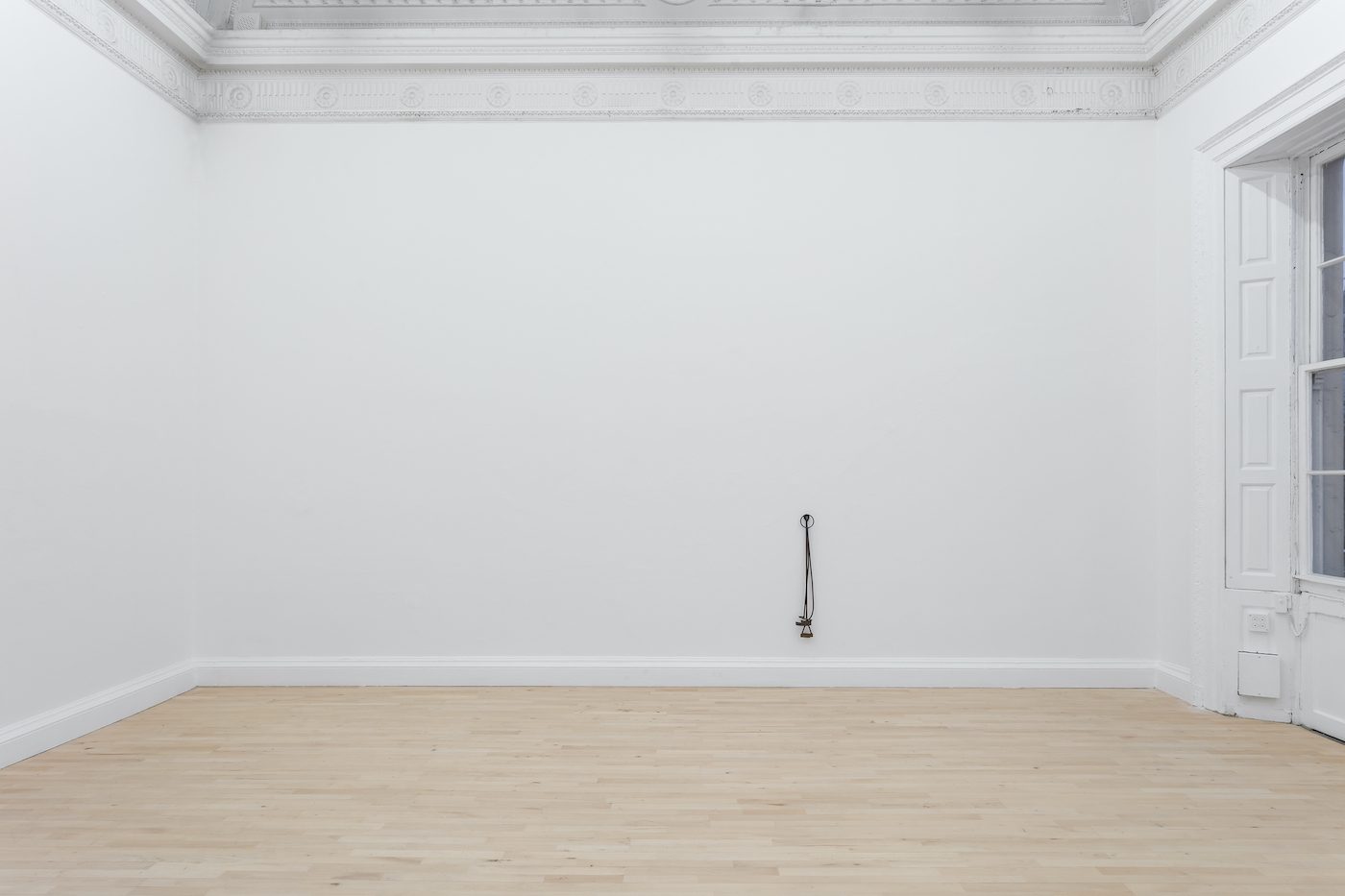 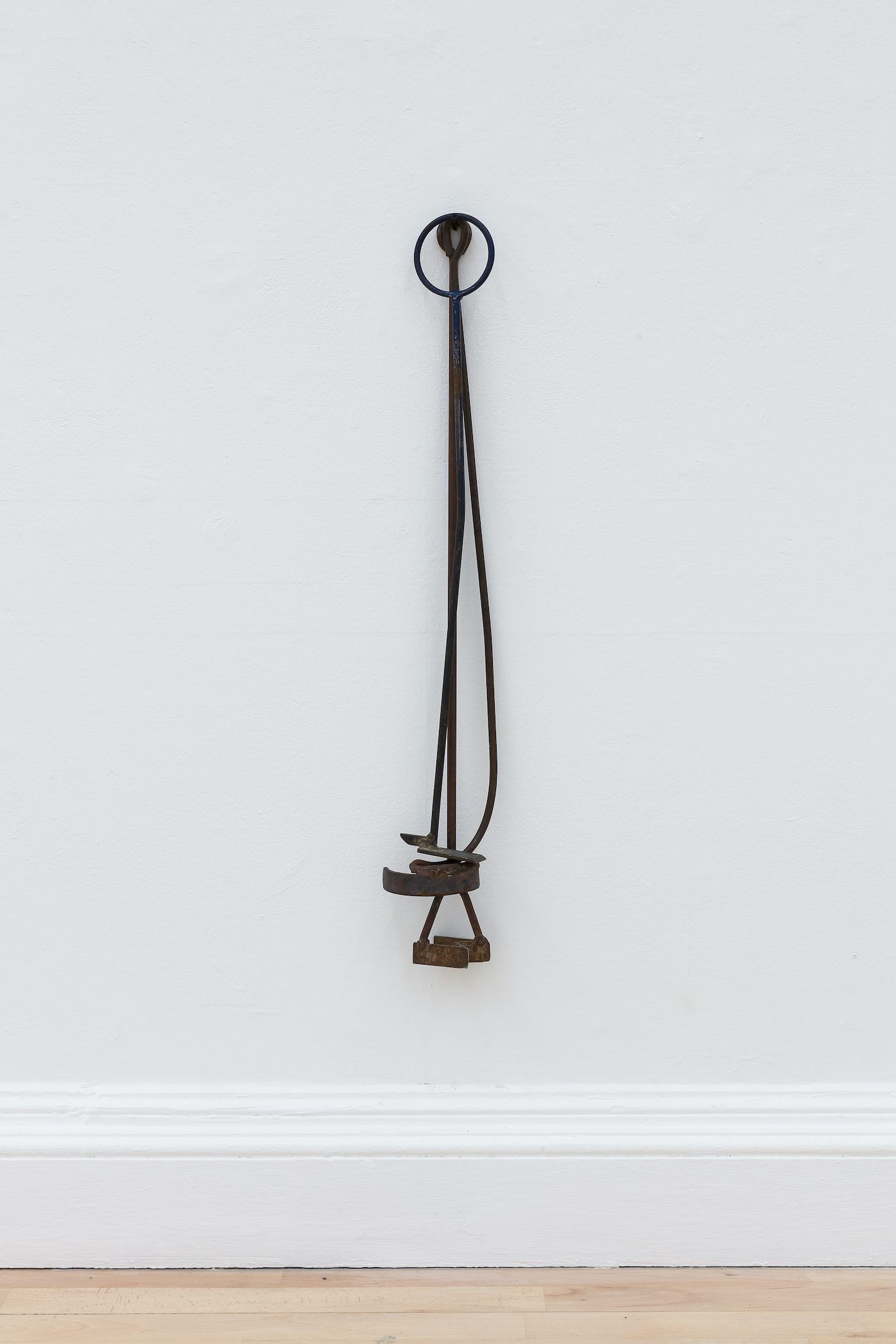 Cameron Rowland, Society, 2020. Cattle brands. 90 × 13 × 11 cm (35 ⅜ × 5 ⅛ × 4 ⅜ inches). Rental.
Christopher Codrington was a Barbadian planter whose book collection formed the Codrington Library at Oxford. Codrington died in 1710, leaving his three plantations in Barbados to the Church of England. The Codrington plantations were operated by the Church to fund the Society for the Propagation of the Gospel in Foreign Parts. Enslaved people on the Codrington plantations were branded with the word “society.” The word chattel was derived from “cattle” as the property relation of livestock was expanded to refer to all moveable property. 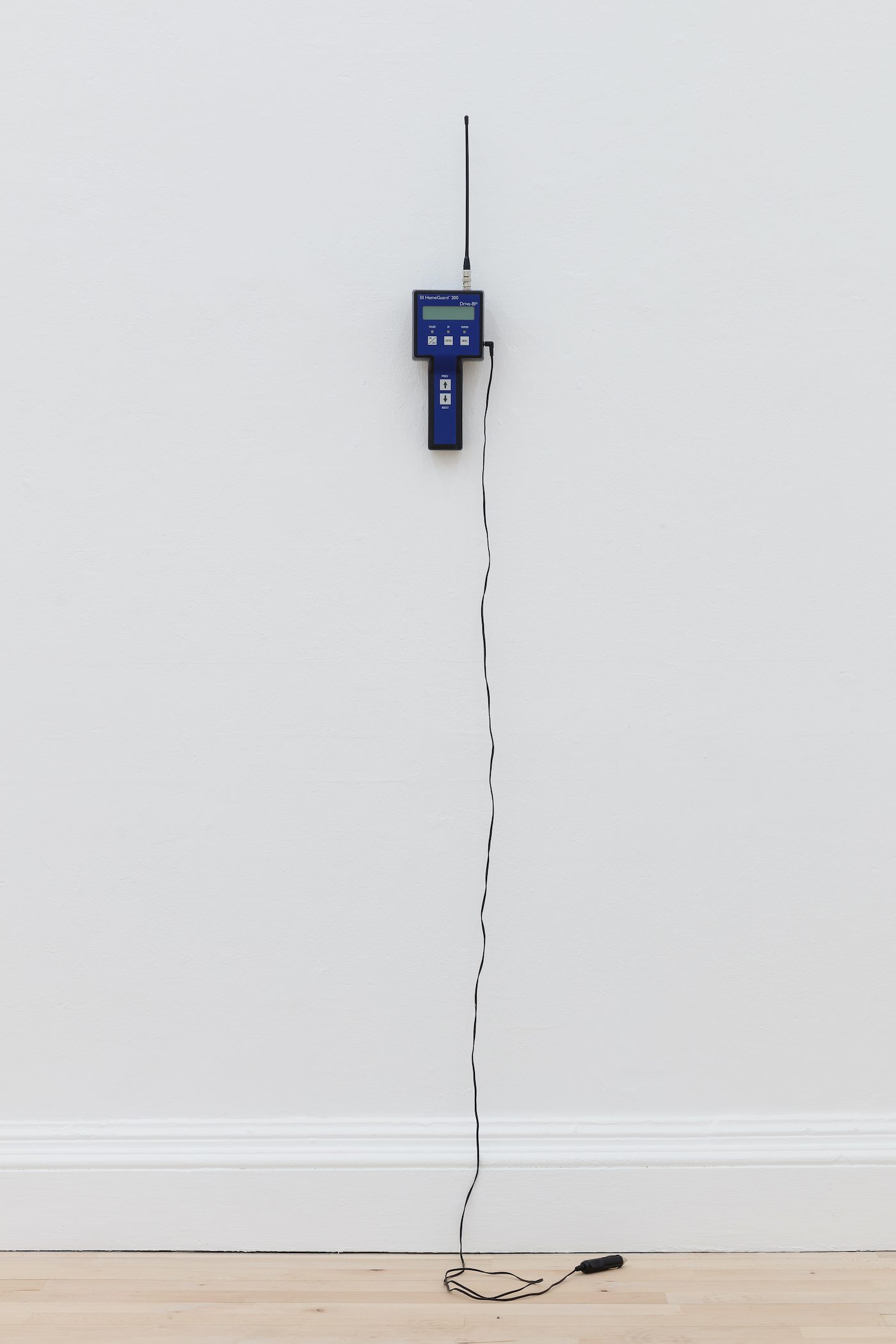 Cameron Rowland, Behavioral Intervention, 2020. Officer monitor for probation, parole, detention.
Electronic monitoring is used to track people. In the U.S., it is often a condition of probation, parole, home detention, and release from immigration detention. It is described as an alternative to incarceration. It is legally termed “partial confinement.” Electronic monitoring imposes curfews stipulating when the person being monitored may and may not leave their home, and exclusion zones stipulating where they can and cannot go. Electronic monitoring in the U.S. rose 140% between 2005 and 2015. If the terms of electronic monitoring are violated, the person being monitored may be “fully confined” in prison.
The officer monitor manufactured by BI Incorporated is “a portable, handheld receiver that detects the presence of HomeGuard or TAD bracelets from several hundred feet away. It enables officers to conveniently monitor clients from outside a home, work, school, or any location.”1 BI Incorporated provides Behavioral Interventions® services. It is a GEO Group company. 1. “Drive-BI®: Enhanced Monitoring in a Portable Package,” BI Inc., accessed January 14, 2020, https://bi.com/products-and-services/drive-bi-radio-frequency-monitoring-device-remote-location-technology/. 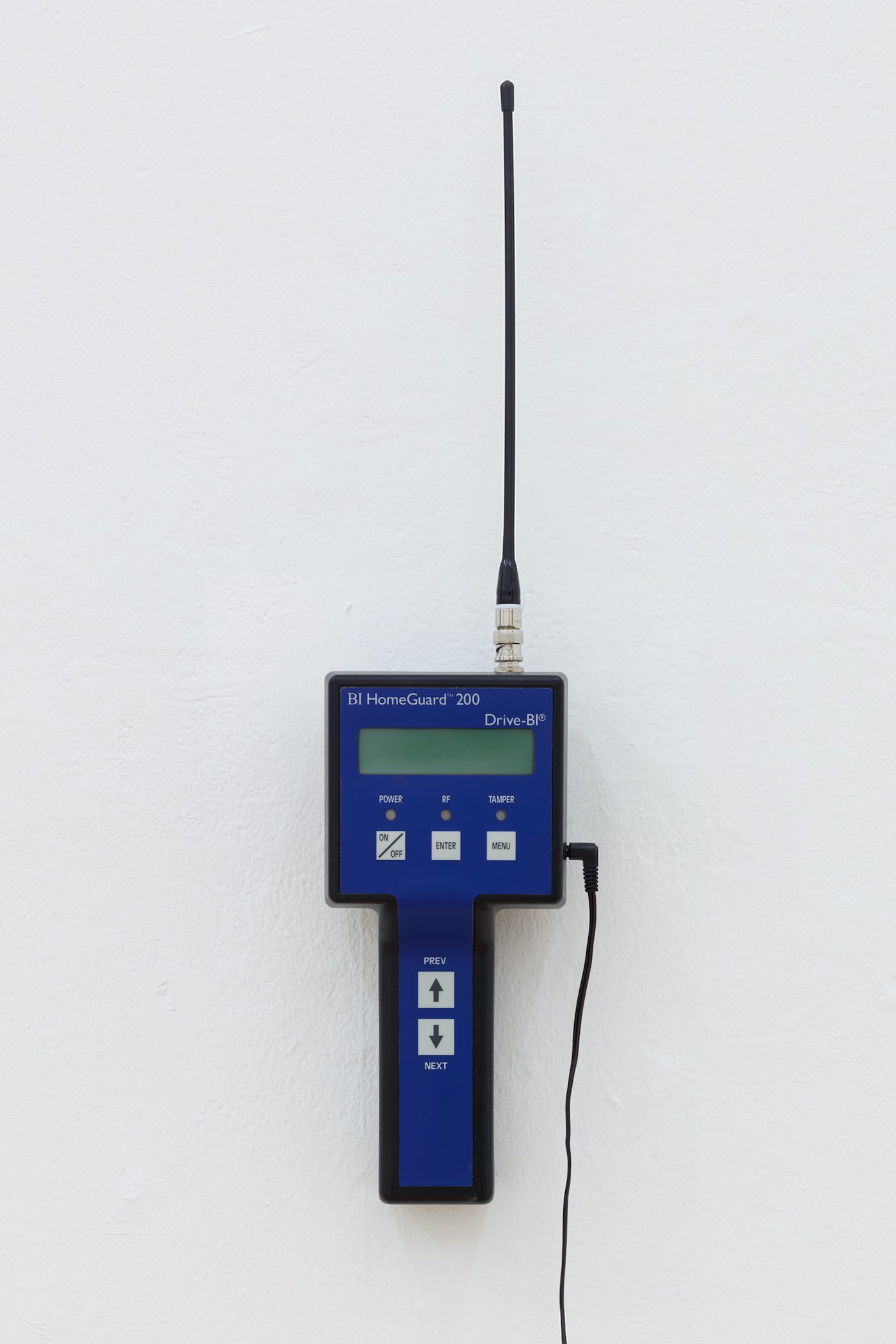 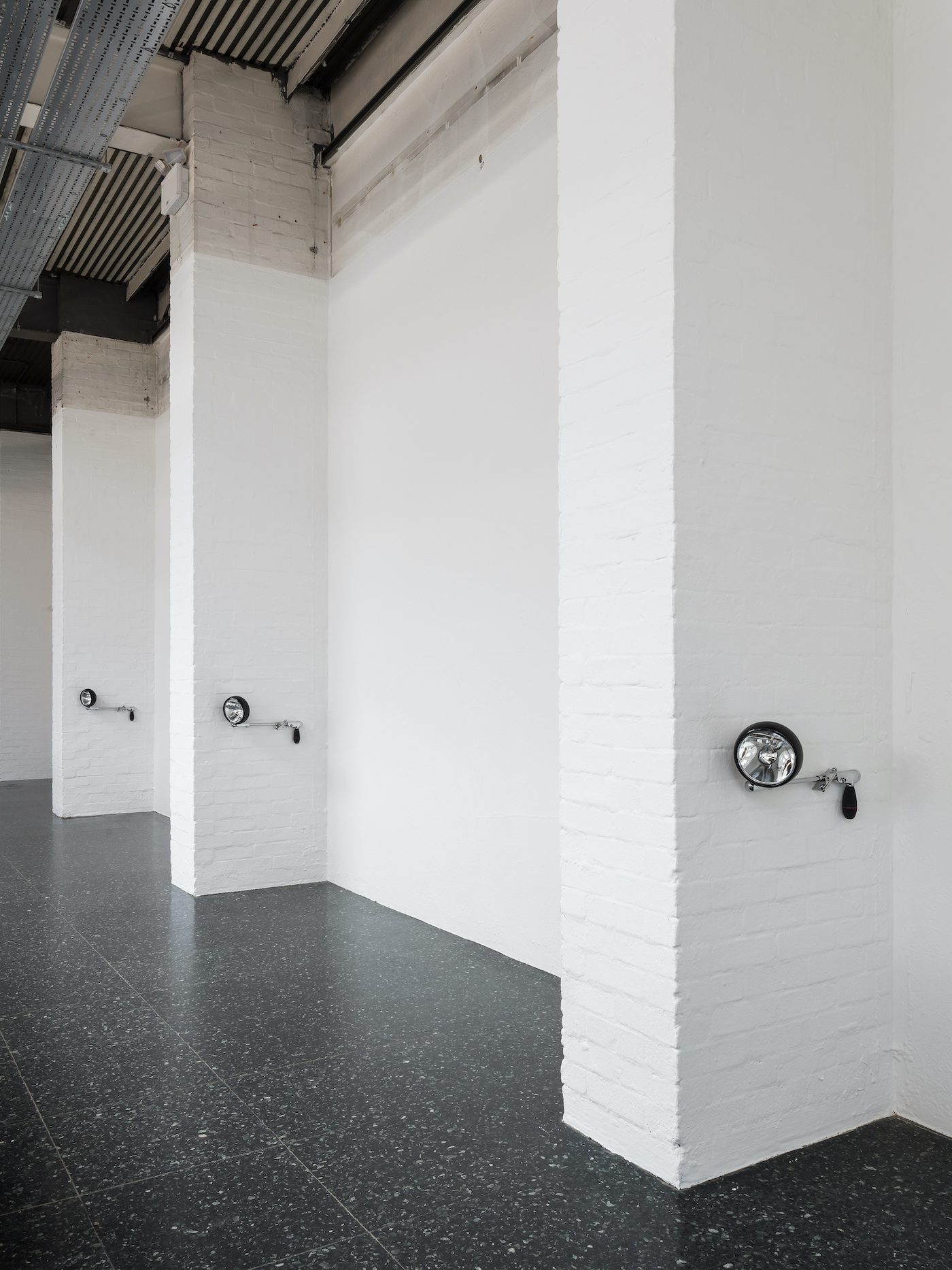 Cameron Rowland, 3 & 4 Will IV c. 73, Institute of Contemporary Arts, London, 2020. Installation view. Cameron Rowland, probability of escape, 2020. Police car searchlight, 50 × 15 × 29 cm (19 ⅝ × 5 ⅞ × 11 ⅜ inches). “[I]f any poor small free-holder or other person kill a Negro or other Slave by Night, out of the Road or Common Path, and stealing, or attempting to steal his Provision, Swine, or other Goods, he shall not be accountable for it; any Law, Statute, or Ordinance to the contrary notwithstanding.” – ‘An Act for the Governing of Negroes,’ Barbados, 1688
“[I]f any person shall kill a slave stealing in his house or plantation by night, the said slave refusing to submit himself, such person shall not be liable to any damage or action for the same; any law, custom or usage to the contrary notwithstanding.” – ‘An Act for the Better Ordering of Slaves,’ South Carolina, 1690. “A citizen may arrest a person in the nighttime by efficient means as the darkness and the probability of escape render necessary, even if the life of the person should be taken, when the person:
(a) has committed a felony;
(b) has entered a dwelling house without express or implied permission;
(c) has broken or is breaking into an outhouse with a view to plunder;
(d) has in his possession stolen property; or
(e) being under circumstances which raise just suspicion of his design to steal or to commit some felony, flees when he is hailed.”
– SC Code § 17-13-20 (2012), South Carolina, current statute 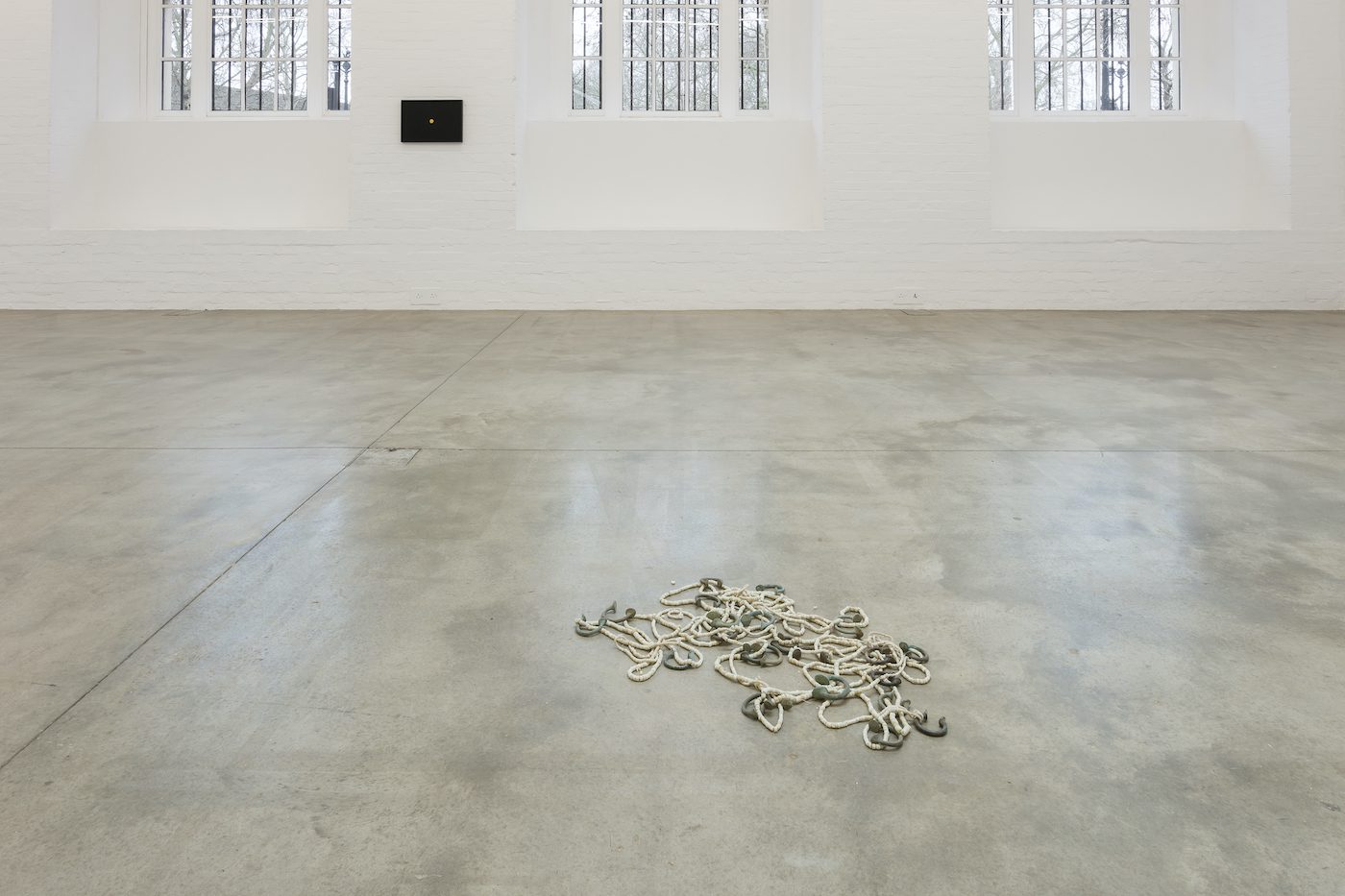 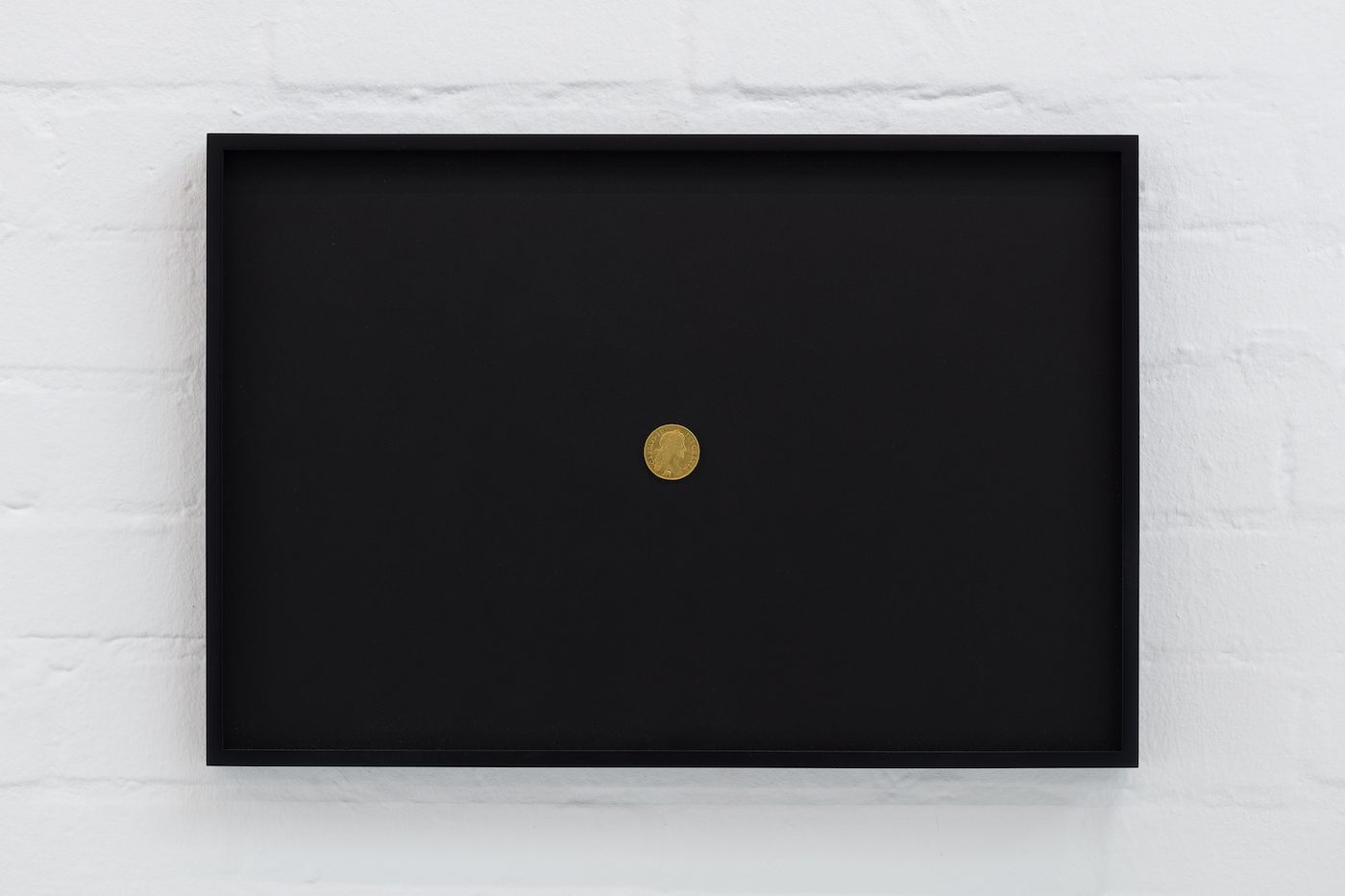 Cameron Rowland, Guineas, 2020. Two-guinea piece, 1664
3 × 3 cm (1 ⅛ × 1 ⅛ inches)
King Charles II founded the Company of Royal Adventurers Trading to Africa in 1660, the year of the Restoration of the monarchy.
The company was renamed the Royal African Company in 1672. It was structured as a public-private company governed by the King’s brother James, Duke of York.1 James continued to govern the company during his reign as King James II. The Royal African Company was created to compete with Dutch transatlantic trade; to provide slaves to English West Indian colonies; to provide revenue directly to the monarch, allowing the King financial independence from Parliament; and to provide gold for the country.2
In 1663, “as a further means of encouragement Charles II ordered all gold imported from Africa by the Royal Company to be coined with an elephant on one side, as a mark of distinction from the coins then prevalent in England. These coins were called ‘Guineas.’”3 The coins functioned both as currency and to increase the prestige of the company in England. The elephant with a castle on its back was the logo of the Royal African Company. Between 1675 and 1688, the Company supplied gold for an average of 25,000 guineas per year.4
The Royal African Company’s gold trade was pivotal in England’s shift to a monetary system based on the standard value of gold. As Master of the Royal Mint, Isaac Newton shifted the country to a de facto gold standard in 1717, which was officially adopted in 1816.5 Britain used the gold standard until 1931.
1. William A. Pettigrew, Freedom’s Debt: The Royal African Company and the Politics of the Atlantic Slave Trade, 1672–1752 (Chapel Hill: The University of North Carolina Press, 2013), 23.
2. Pettigrew, 22–26.
3. George Frederick Zook, “The Royal Adventurers in England,” The Journal of Negro History 4, no. 2 (1919): 153.
4. Pettigrew, 30.
5. Angela Redish, “The Evolution of the Gold Standard in England,” The Journal of Economic History 50, no. 4 (December 1990): 789–90; David Kynaston, Till Time’s Last Sand: A History of the Bank of England, 1694–2013
(London: Bloomsbury, 2017), 42.
27. avril 2020 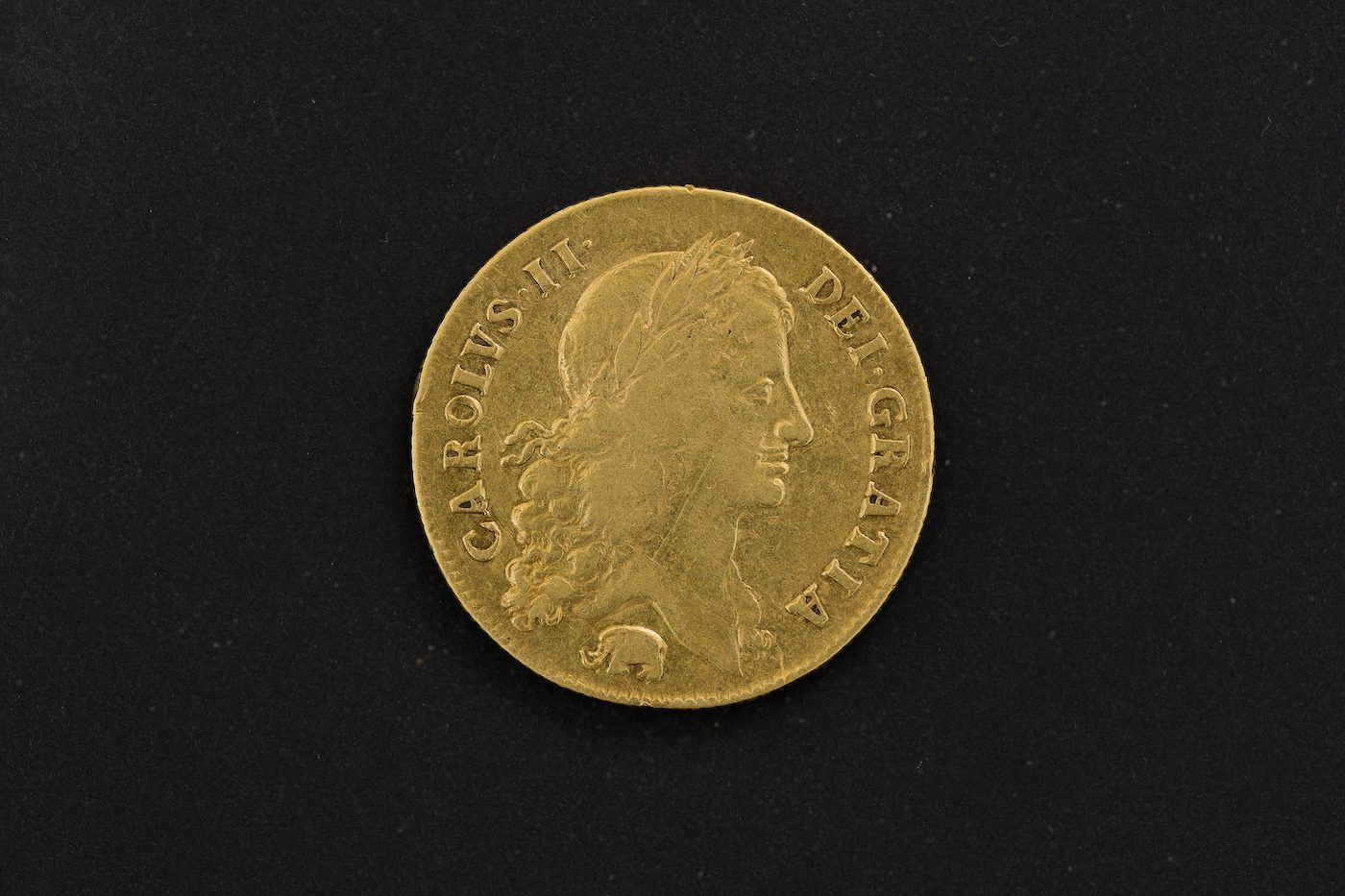 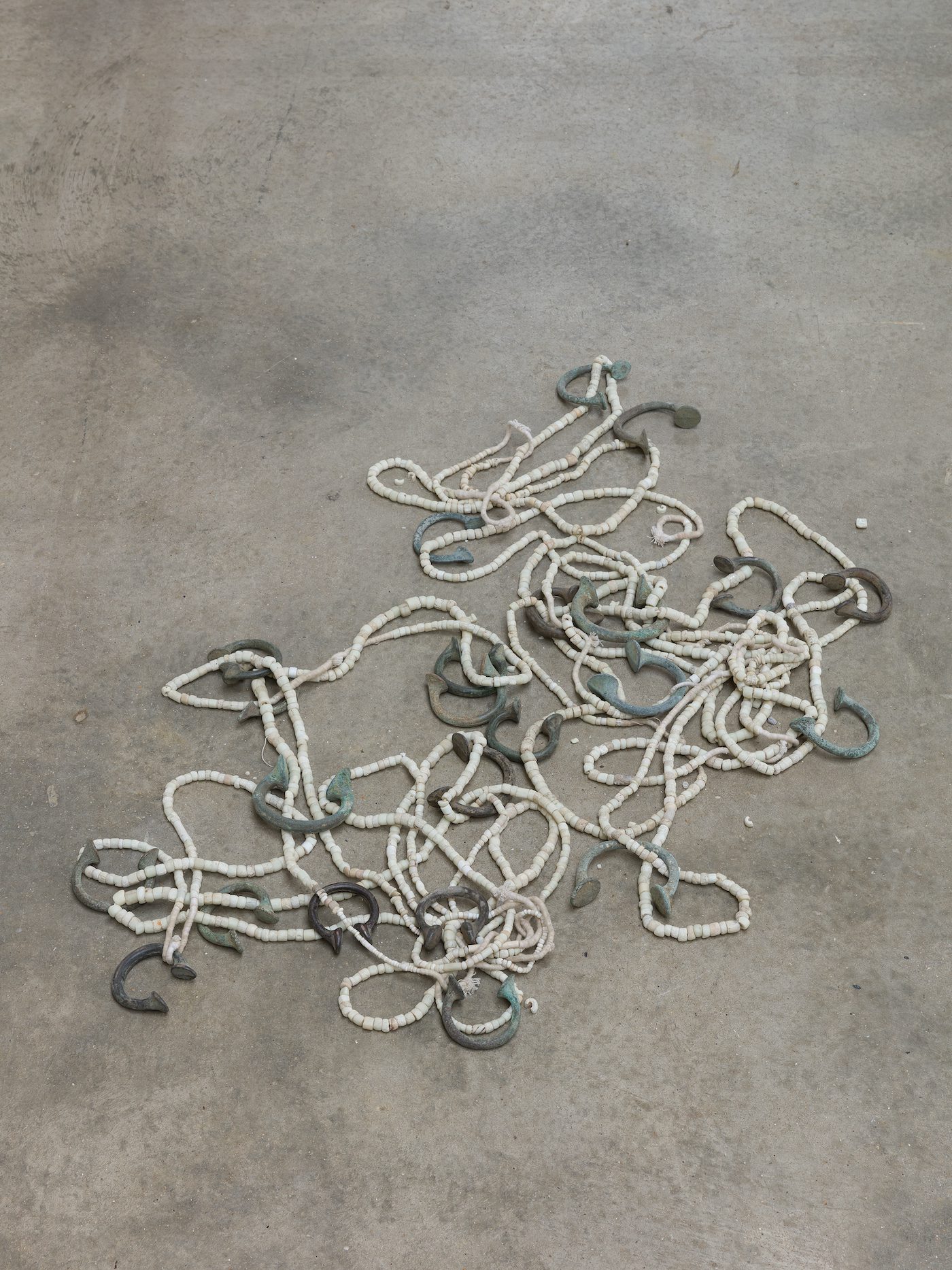 Cameron Rowland, Pacotille, 2020. Brass manillas manufactured in Birmingham, 18th century; glass beads manufactured in Venice, 18th century. 103 × 68 × 3 cm (40 ½ × 26 ¾ × 1 ⅛ inches)
Rental. European goods traded for enslaved people were manufactured specifically for this purpose. Manillas were used as a one-directional currency, which Europeans would offer as payment but would never accept. The Portuguese determined the value of slave life at 12–15 manillas in the early 1500s.1 Birmingham was the primary producer of brass manillas in Britain, prior to the city’s central role in the Industrial Revolution. The British also used cheap beads acquired throughout Europe to buy slaves. Eric Williams describes the “triple stimulus to British industry” provided through the export of British goods manufactured for the purchasing of slaves, the processing of raw materials grown by slaves, and the formation of new colonial markets for British-made goods.2 The production of European goods for the slave trade supported domestic manufacturing markets. British trade in West Africa was understood to be nearly 100% profit.
What renders the Negroe-Trade still more estimable and important is, that near Nine-tenths of those Negroes are paid for in Africa with British Produce and Manufactures only. . . . We send no Specie or Bullion to pay for the Products of Africa, but, ’tis certain, we bring from thence very large Quantities of Gold; . . . From which Facts, the Trade to Africa may very truly be said to be, as it were, all Profit to the Nation.3
Goods produced for the trade of slaves, which carried nearly no value in Europe, were called pacotille. Pacotille translates from French to English as “rubbish.”4
1. A. H. M. Kirk-Greene, “The Major Currencies in Nigerian History,” Journal of the Historical Society of Nigeria 2, no. 1 (December 1960): 146.
2. Eric Williams, Capitalism and Slavery, 2nd ed. (1944; repr. Chapel Hill: The University of North Carolina Press, 1994), 52.
3. Malachy Postlethwayt, The National and Private Advantages of the African Trade Considered, 2nd ed. (London: John and Paul Knapton, 1746; London: William Otridge, Bookseller, 1772), 3. Citations refer to the Otridge edition.
4. Marie-Hélène Corréard, “pacotille,” in Pocket Oxford-Hachette French Dictionary: French-English (Oxford: Oxford University Press, 2007), 594.

Minia Biabiany: I killed the butterfly in my ear

Beyond the Black Atlantic

HAVE YOU SEEN A HORIZON LATELY?