Zina Saro Wiwa has many talents. Working between New York and Port Harcourt – where she set up her Boy’s Quarters Project Space – she has shifted roles from BBC journalist to filmmaker to artist and curator. With C& she speaks about the current Boy’s Quarters Project Space exhibition, which puts environmentalism and feminism into dialogue. And she explains how activism and re-imagining her environment have influenced her artistic approach.

Contemporary And: Your current exhibition as curator, Anunu: Notes on the Divine Feminine, addresses how the feminine and our spirituality connect us to the earth and put us in conversation with the natural world. How can we expand environmental movements to include conversations about the threat to our indigenous cosmologies?

Zina Saro Wiwa: I think we do it by making artwork, by thinking, researching, making new objects of contemplation that are charismatic enough to travel around the world. By bringing people together to have conversations. By publishing. It is particularly important that this happens in the very places that the cosmologies are disappearing. A lot of the academic research on this work is done by non-Africans, but while we are, increasingly, moving into the arts – as far as tertiary education is concerned – we as artists and curators can perform our own research and find new ways of unearthing, creating, and deploying knowledge.

C&: Environmentalism is often viewed through a Western lens. What are your thoughts on how we can make it our own?

ZSW: I think multiple environmentalisms or systems of dealing with pollution or conservation already exist, they’re just being suppressed or ignored or they operate in the shadows. My gallery partly exists to uncover these latent environmentalisms and to explore the relationship between self and environment. Our current show is about Igbo cosmology and features a piece about women in Kogi State. Through this work we can begin to think about the fact that most of our farmers and market traders are women, so in a sense they are the custodians of the land. There is a connection between the feminine archetype and how we care for the land. Unearthing, rethinking, and redeploying information about our historic spiritual connections to the land, and placing them in the context of an environmentally concerned site, helps to figure out our relationship with it and questions where environment actually is. 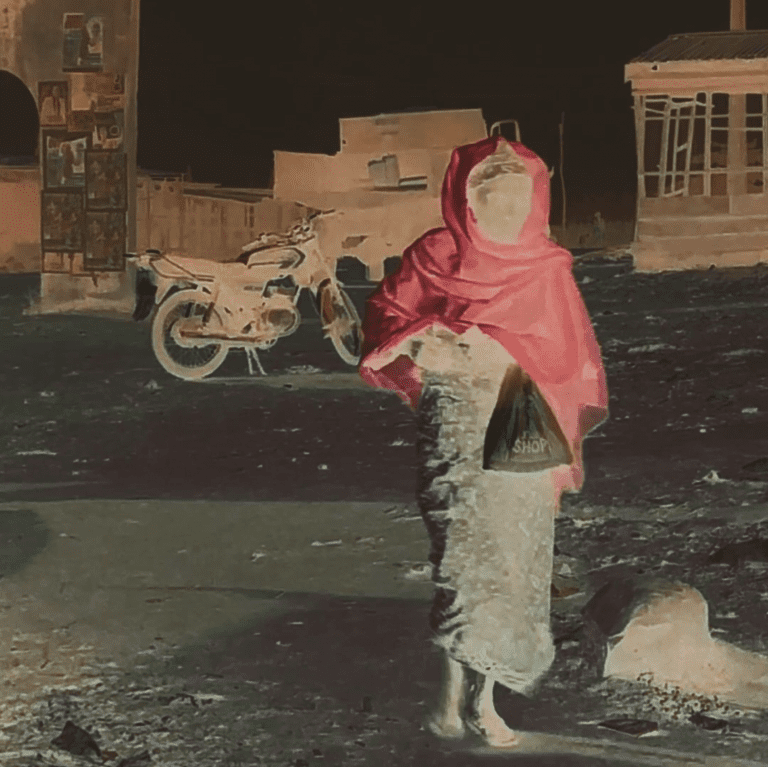 C&: In Anunu: Notes on the Divine Feminine Lubee Abubakar’s work highlights the burden that women carry, whereas Chioma Ebinama seeks to re-imagine the feminine through Igbo cosmology and precolonial traditions. What was your reason for placing these works in conversation with each other?

ZWS: When I first saw Chioma’s work I was blown away, and I simply said: “This is my next show.” Lubee and I had been going back and forth for two years with her work. I love that we have these two female artists in the space. It reaffirms my commitment to enhancing the feminine archetype in the hyper-masculine and psychically unbalanced Niger Delta. I love how both pieces are love letters to women and their lives, how they honor the mundane and reflect the spiritual. Chioma’s work is about the spiritual layer of female life and Lubee’s work features colored “negative” video images which have an utterly spectral quality. To me, their works enhance each other and access this subcutaneous spiritual layer of life, expressing it in different but complementary ways.

C&: There is an intersection between documentary, ritual, and performance within your own works. What is it about performance that lends itself to your storytelling and art-making process?

ZSW: I have done work about crying, kissing, praying, and eating. They are quotidian activities, but I think there is something transcendental in the quotidian when you put a lens on it in a very particular way. I believe there is information, storytelling, and emotion-based choreography in these everyday activities that bypass our frontal cortex. 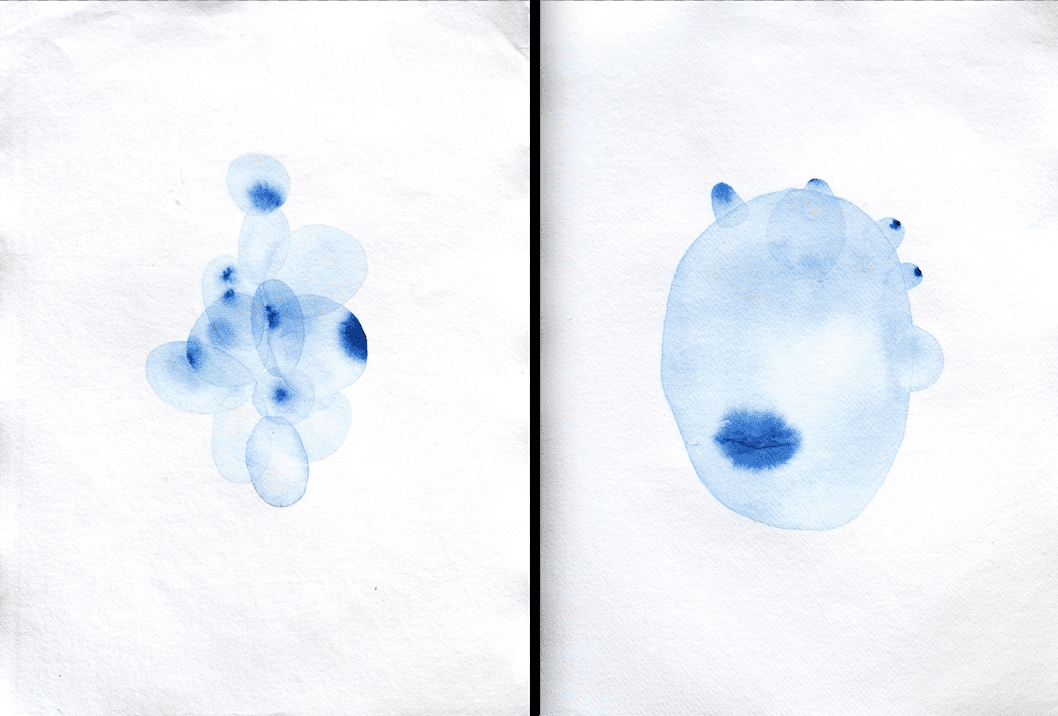 C&: From your work with pineapples to the Table Manners series, why is food such a poignant feature in your art production?

ZSW: I’m not a food artist in the way someone like Jennifer Rubell is and I don’t use art as a sculptural medium. But I am interested in its consumption, its socialization, and its spiritual or cosmic properties. So maybe the performances surrounding food are the things that I find information in. In the Niger Delta for example we have very little control over oil extraction but the agricultural is still our domain and an important part of our rehabilitation. So for me food has been a useful space to think about power, reconsider histories, and re-imagine futures.

C&: In this show there are elements and themes of re-imagining womanhood. In the past you have talked about re-imagining a Niger Delta beyond its traumas. Why is re-imagination important to you?

ZSW: Re-imagination is about reclaiming power and a certain amount of psychic control over identity, over your future. If you are victimized, my instinct has always been to go back to basics and use your whole self, your imagination, to dictate a new self. To not let the world, or an attacker or a horrific event, tell you who or what you are but for you to express to the world your multifaceted truth. I think I have always been trying to escape identity-based prisons my entire career. I don’t believe you can grow a healthy sense of self from a narrow victim-based identity. Trauma is a tragedy and a fact in many people’s lives, but if it becomes your whole identity it owns you and there is no space for growth. So part of the process of transcendence and renewal is asking: “Who are you outside of trauma?” 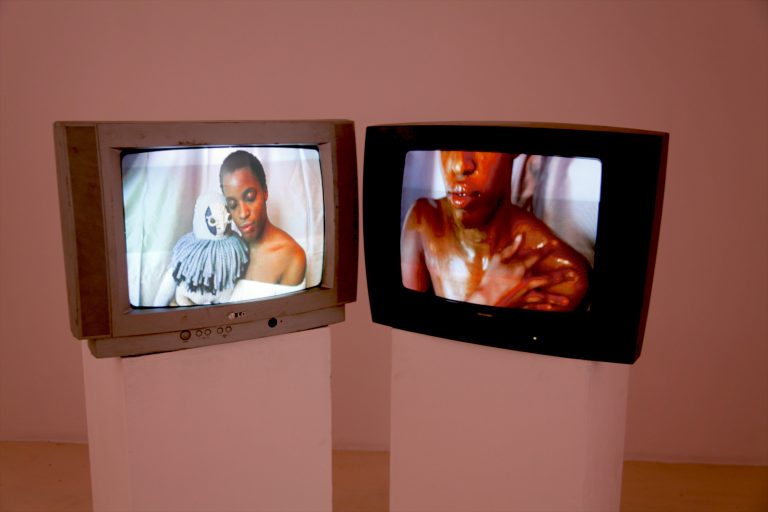 C&: Did you find yourself having to re-imagine your creative identity?

ZSW: Becoming an artist forced me to re-imagine it. I no longer had to ask permission for my creative output or fit my work into a pre-determined format. I still struggle with my identity as an artist though. Asking myself to re-imagine myself as a creator is challenging. But I have to do it constantly as the new works I think up force new questions.

C&: Why was it important for you to have the Boys Quarters Project Space in Port Harcourt?

ZSW: It was mainly because of my personal history and connection with Port Harcourt. Important activism has taken place there since the early 1990s, surrounding the pressing issues of the Niger Delta. We need to broaden and deepen this activism by facilitating serious in-depth self-reflection. I believe we have something specific to share with the world not only given the recent tragic history but also considering our unique and highly diverse ethnic and cultural histories. So much is happening in Lagos already and it has always been a cosmopolitan center. But we need sites of cultural activation in other parts of the country too.

Anunu: Notes on the Divine Feminine, featuring works by Chioma Ebinama and Lubee Abubakar and curated by Zina Saro-Wiwa, is up at Boys’ Quarters Project Space until May 2019.

Zina Saro-Wiwa is an artist working primarily with video but also photography, sculpture, sound and food. She lives and works in Brooklyn, New York as well as running a practise in the Niger Delta region of Nigeria where she founded the contemporary art gallery Boys’ Quarters Project Space for which she regularly curates.

Wana Udobang is a Nigeria-based freelance journalist, poet and documentary filmmaker whose work is at the intersection of women’s rights, social justice, healthcare, climate change, culture and the arts.

This text was commissioned within the framework of the project “Show me your Shelves”, which is funded by and is part of the yearlong campaign “Wunderbar Together (“Deutschlandjahr USA”/The Year ofGerman-American Friendship) by the German Foreign Office.

In Conversation with Zohra Opoku

From Ghana to Bahia

In Conversation with Akinola Davies Jr.

“Colonialism in Britain is felt through the diasporas”